If spiders scare but fascinate you at the same time, and would like to pet one, this is your chance. Few things are creepier yet more fascinating than a thick, black tarantula that you can pet safely. 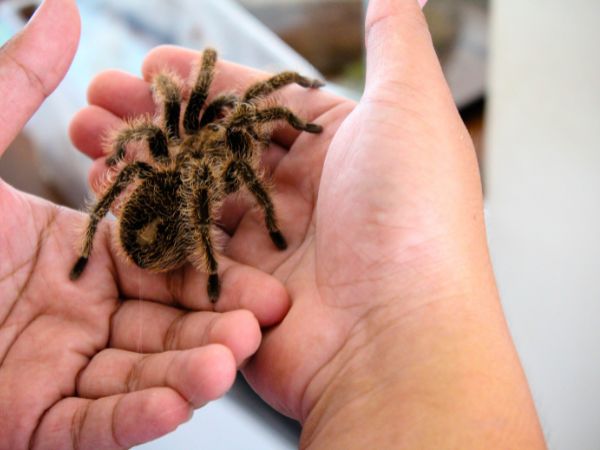 These are generally misunderstood creatures, as tarantulas are nowhere near as grim as their appearance suggests. They’re actually peaceful and calm creatures that don’t mind some human interaction occasionally. If you don’t know much about tarantulas or you’ve never had one before, this article is for you.

Today, we will discuss the 9 best tarantula species for beginners, so let’s get straight into it. 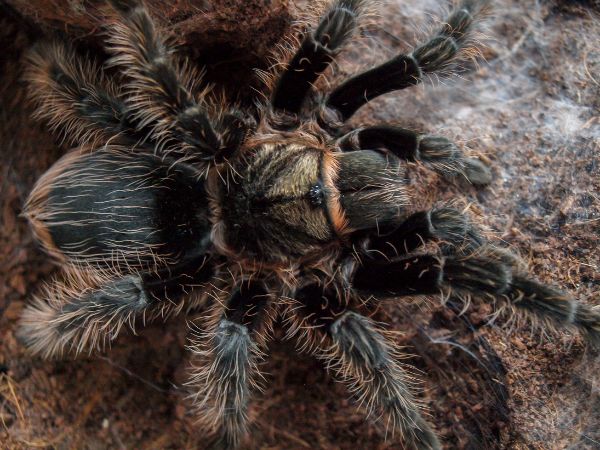 The curly hair is as exotic looking as it sounds. This tarantula can reach 5.5 inches in size and weigh approximately 1 ounce as a full-grown adult. You can recognize the breed by its black or orange-ish body with curly hairs all over the legs and abdomen. The upper area of the abdomen and the top of the thorax are usually bald.

This slow-moving spider likes to hide and dwell around rocky areas and caves. It doesn’t use too much vertical space, so you don’t need a tall tank. 10 gallons should be enough for one specimen.

This is a peaceful and calm animal that doesn’t like to move much. It doesn’t need any special care outside a clean and dry habitat with many hiding areas. Add some leaves, caves, branches, and other decorations that your tarantula can climb and explore.

You can hold it occasionally so long as you don’t squeeze it. 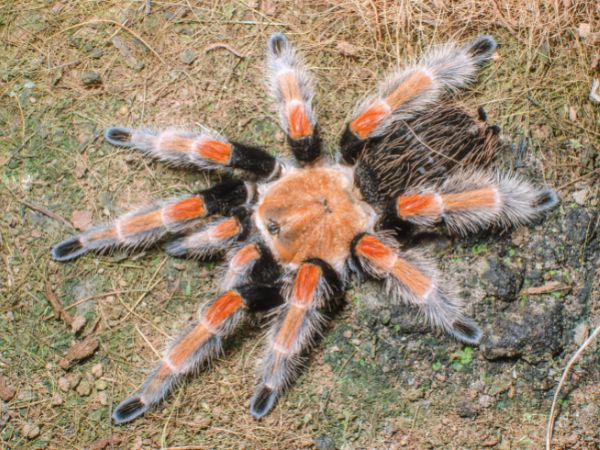 This one also goes by the name of Mexican Redknee tarantula and ranks as one of the most handsome species. The Smith’s Redknee is generally brown with orange or red patches on all leg joints. Most specimens also have a yellow head to match the pattern.

These spiders can reach 5 inches but only weigh up to 0.5 ounces. Interestingly, this species can live up to 30 years in captivity (only 10 for males), making it one of the top choices for tarantula lovers. It also doesn’t hurt that the tarantula is peaceful and docile.

The Smith’s Redknee tarantula isn’t difficult to keep, but it requires some specific environmental conditions to thrive. This is due to increased humidity and temperature in its natural dwelling area. Aim for a humidity level of 60-70%, depending on your spider’s comfort, and temperatures around 75-80 °F.

This is also a burrower, so craft its layout with that in mind. I recommend a thick substrate, at least 4 inches, consisting of peat moss and soil. Live plants aren’t absolutely necessary, but you can use fake ones for an aesthetic effect. These will mimic the spider’s natural habitat, increasing its comfort and peace of mind. 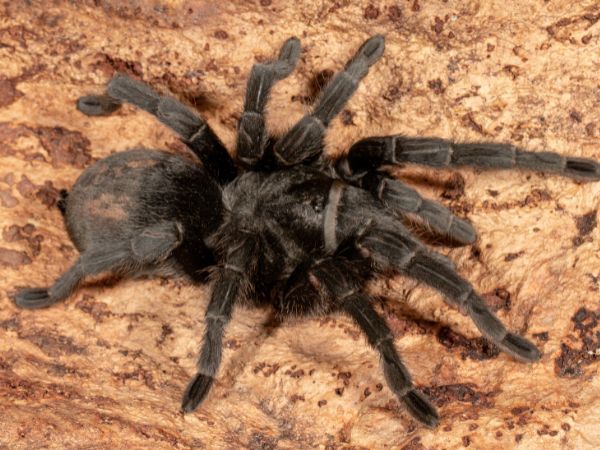 The Brazilian Black is pretty much the staple in the tarantula world. This massive and thick spider can reach 8 inches and weigh up to 1 ounce, although some go beyond this weight. The spider’s appearance is as simple as it sounds, with a black and thick body covered by thousands of hairs for a fluffy appearance.

The Brazilian Black has a wide leg span and ranks as a docile and friendly animal. It doesn’t scare easily, doesn’t mind occasional petting and handling, and makes for a great beginner pet.

Aim for temperatures around 65-85 °F and a humidity level of 60-70%. This species enjoys a heavily planted setup with a thick substrate for burrowing purposes. The tank’s layout should bring in a variety of hiding areas and decorative elements for exploration purposes. Black tarantulas like to move around their habitat occasionally and even climb if such opportunities exist.

Sprinkle some leaves on the substrate and keep the substrate at least 4-5-inch thick. This allows the spider to burrow and protect it in case of fall during its many climbing journeys. 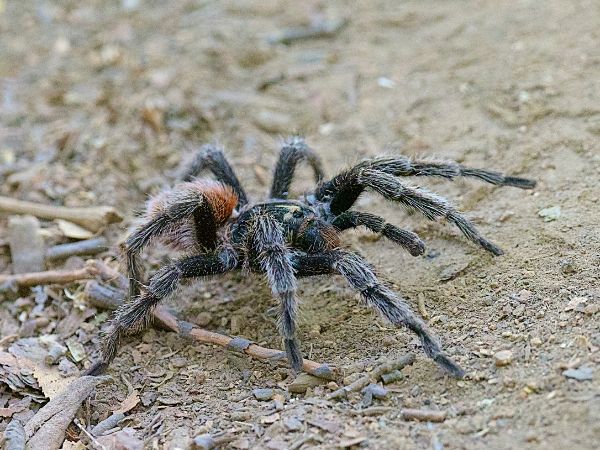 The Chilean Flame (Homeomma chilensis) is a different breed in terms of appearance, requirements, and behavior. These spiders are generally black, with a red splash on the abdomen’s top area. Hence, the name. As a dwarf tarantula, the Chilean Flame doesn’t grow above 3.5 inches which is still impressive for a spider.

This one is calm and peaceful but also curious. It won’t hesitate to occasionally climb your hand and socialize with you for a while. Interestingly enough, these spiders change appearance as they grow. While juveniles are almost completely orange and showcase transparent legs, adults are black.

This is an adaptable and resilient species that doesn’t need any special care. Chilean Flames are substrate dwellers that like to burrow and hide when scared or threatened. Which doesn’t happen often, as this spider is thick-skinned and is more curious than frightful.

Don’t add too many tall decorations in their enclosure because they will climb them. This puts them at risk of falling, and Chilean Flames are not built to deal with that. Aim for temperatures around 70-75 °F and humidity levels up to 70%. Keep the substrate at 4 inches or thicker, and make sure it’s always dry. These animals don’t like moist substrates and will avoid burrowing if it’s not completely dry.

Diet-wise, the Chilean Flame is extremely manageable; after all, it’s a smaller spider, so it doesn’t eat as much as larger species. One large cricket every 2-4 weeks is generally enough for an adult. Other people feed them 2-3 small crickets per week, which also works, depending on the spider’s appetite. 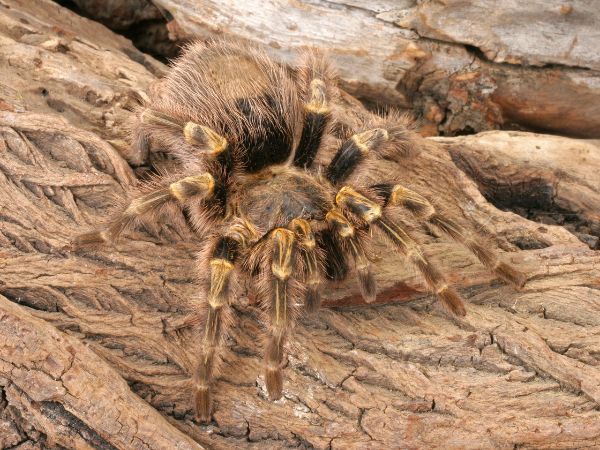 The Chaco Golden Knee is another handsome and large tarantula species to consider for your spider tank. This is among the hairiest species, with a thick body covered by long and fluffy yellow hairs. The spider is generally dark brown with yellow tints at the leg joints.

Your typical Chaco Golden Knee will grow up to 8 inches and live up to 15 years (stats describing the female.) These are peaceful and docile spiders but can get alarmed at times. These tarantulas are peace seekers, so try not to disturb them too often. If you do hold or pet them, do it gently and gracefully; otherwise, the Chaco may flick its body hairs, causing skin and eye irritation.

Given the tarantula’s size, I recommend a habitat of at least 15 gallons for optimal space. A 6-inch-deep soft substrate is also necessary to cater to the spider’s burrowing needs. Coconut fiber and soil make for a good mix in this sense.

The overall maintenance routine needed is manageable. Keep the spider’s habitat out of direct sunlight, keep the substrate dry, and feed your tarantula once or twice per week, based on the prey’s size and your spider’s appetite. 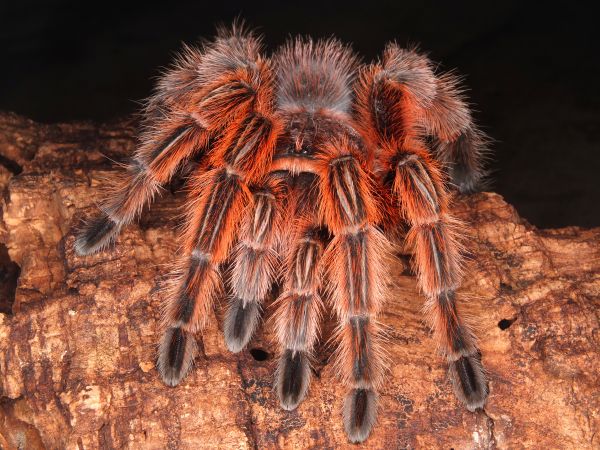 The Chilean Rose tarantula is a handsome specimen that can reach 5.5 inches in ideal conditions. They don’t need much maintenance and can easily adapt to life in captivity.

The typical Chilean rose is light brown, with plenty of orange hairs covering the entire body, creating something like fur. The spider will use these hairs as defensive projectiles in case their stressed or rattled. So, handle them with care.

Chilean Rose tarantulas are a bit more active than your typical tarantula. Since they’re desert dwellers, Chilean Rose tarantulas are very resilient to temperature changes and showcase a mixed behavior. They’re both substrate burrowers and roamers that like to explore their habitat daily. This makes them more interesting to observe compared to pure dwellers who don’t go out much.

These spiders don’t need any type of special attention. Keep them out of direct sunlight and provide them with at least 10-15 gallons of space for workout purposes, and they will be fine. They should live in a dry and clean environment, so always keep their habitat in good conditions. Remove uneaten food and clean any dead matter that could rot and produce bacterial or fungal growths.

Be careful when handling this species. While the Chilean Rose is generally peaceful, its hairs can sometimes cause irritations. The tarantula herself isn’t too keen about being handled too often, either. After all, this is a wild animal that will never be fully tamed. 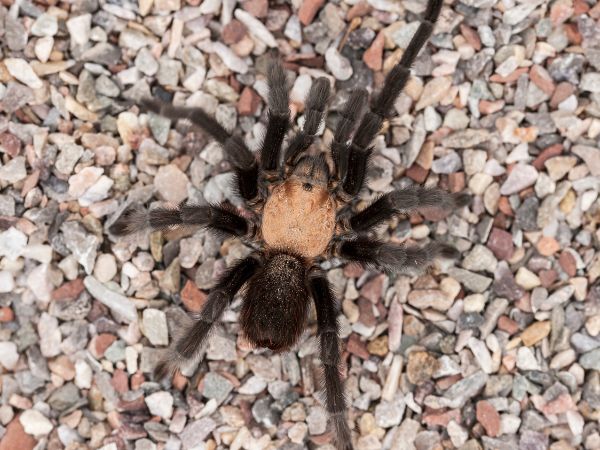 The spider has a wide and thick thorax, a smaller abdomen, and very long and thick front legs. The body is generally sand-yellow with long, silky hairs on the hind legs and abdomen. The pedipalps are also thick and strong.

Aim for temperatures around 68-72 °F, although the tarantula won’t mind some mild fluctuations from time to time. So long as the temperature doesn’t drop below 68 F.

A deeper substrate is also necessary since these spiders are native burrowers. You won’t see them much during the day, as they prefer to hide in their burrows for the most part. Aim for a substrate of at least 4-5 inches in depth, preferably dry and clean.

Most importantly, try not to pet and befriend your tarantula too often. While these spiders are generally peaceful, they’re not fond of being handled too often. Arizona Bloods are known to bite at times and experience higher stress when held for too long or handled too often. Their bites won’t hurt too much, and their poison is mild, but you don’t want to stress out your little friend too much. 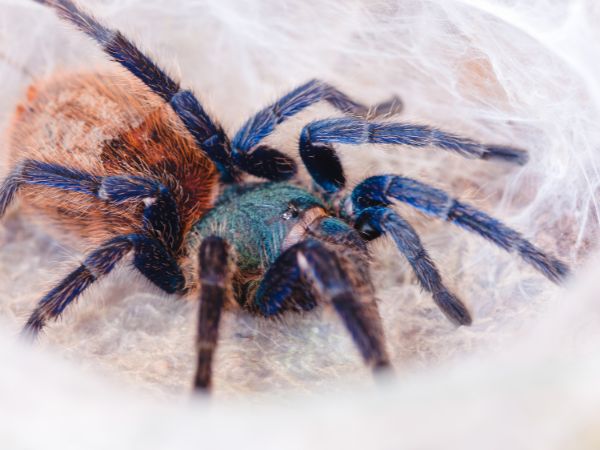 The typical Greenbottle Blue has a yellow abdomen, a turquoise cephalothorax, and dark-blue legs, everything covered in yellow hairs. This is a fast-moving tarantula that likes to explore its habitat occasionally, although it prefers to stick to its burrow area.

Aim for a 4-inch-thick substrate, preferably more, and keep temperatures around 70-78 °F. Consider investing in a heating pad if the room temperature tends to drop below 70 °F. Environmental lights should be dim, as this keeps the spider more comfortable overall.

Also, consider investing in a slightly taller terrarium, preferably 18 inches or higher. These tarantulas are known to explore their habitat once in a while, climbing on different decorative elements available. Just make sure they don’t risk falling off and hurting themselves.

Unfortunately, Greenbottle Blue tarantulas are not too friendly in terms of petting. You should never hold or pet your tarantula as these animals are easily stressed and rather frightful. Their hairs also cause intense urticaria. 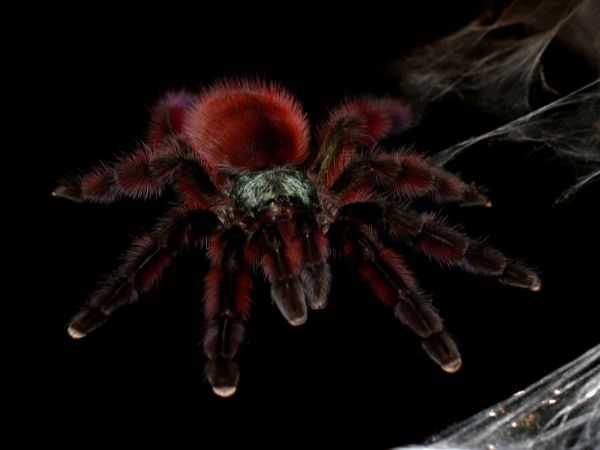 This is a more interesting tarantula species, as it steers away from the burrowing types we’ve had so far. Pink-toe tarantulas (Caribena versicolor) are arboreal spiders that like heights. So, you should house them in a vertical setting that allows for plenty of climbing opportunities. Don’t worry about the spider falling and hurting itself. This one is an adept climber with agile movements and tight grips.

The tarantula is generally black, with pink or orange spots at the tip of the legs. The pink areas are often very bright, making for an interesting sight when watching the spider moving about its environment.

Keep the temperature between 70 and 80 °F and the humidity around 50-60%. A 2-inch substrate should suffice, given that the Pink-Toe has no interest in burrowing.

Unfortunately, these tarantulas aren’t meant for petting, either. They are rather skittish and known jumpers and fast movers. You can’t really hold them down except by force, which is less than ideal, as you would imagine. Also, the Pink-Toe tends to slingshot feces when threatened or stressed, so you have that going as well.

We’ve only gone through 9 types of tarantulas available, but there are many others to consider. Settle for one of these if you’re a beginner and you may upgrade to other species along the way. Although, that’s not likely to happen anytime soon, given that most of these species can live decades in good conditions.

Keep in mind not to handle your tarantula pets too often, provide them with clean and healthy living quarters, and never have more than 1 tarantula per enclosure. Spiders are known for their territorial and cannibalistic tendencies.