If you love birds, then you should be familiar with canaries. These lovely birds are famous for their songs and general appearance. But there are more traits that make them stand out than just making melodious songs. And this is where most breeders show their interest when it comes to birds. 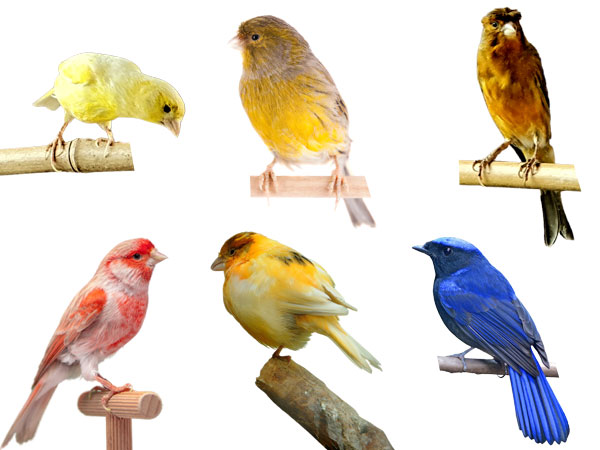 The canaries fall into three major categories-those bred and raised for their color, those bred for their physical features or shape, and those raised for their songs. Most breeders who deal with these birds are usually interested in the shape, form, and size but not the color of their feathers or songs.

Despite their physical differences, canary birds are arguably one of the most popular pet finch species. These colorful birds evolved on tiny Islands (the Canaries) located off the West African Coast in the Atlantic Ocean.

They are also common in La Gomera, Tenerife, and La Palma along with the island of Madeira and the Azores (not part of the Canaries). A few wild species are also found in Puerto Rico, Morocco, and Hawaii ( introduced here in 1911).

Their natural habitats comprise woodlands and mountains although they can adapt well to any environment. For the past two centuries or so, different types of canaries have so far been bred by humans. These pet birds are sometimes classified as subspecies known as Serinus canaria domesticus.

Selective breeding produced a variety of sizes, wonderful shapes, and color variations. Their colors range from white, orange to pink and iconic yellow which many people associate with the canary birds. 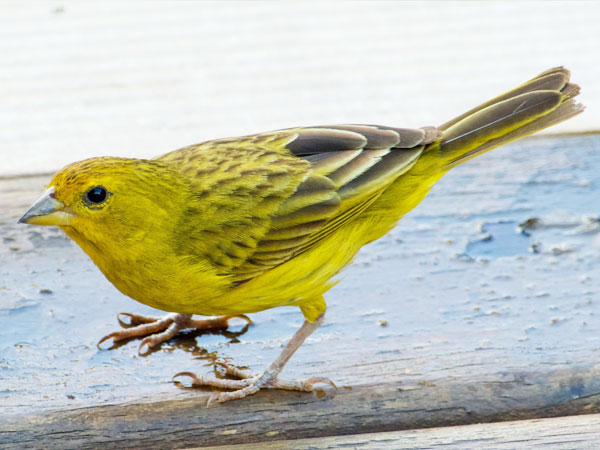 Atlantic Canary is scientifically referred to as Serinus canaria and it belongs to the Fringillidae family. It is almost similar to the smaller European Serin. The bird is native to the Canary Islands where it is found in large numbers. Atlantic Canary is indeed the most popular type of canary bird that is kept as a pet.

Atlantic Canary is distinguished from other Canary birds due to its melodious song. The song produces what is known as “liquid” notes.

You can easily identify Atlantic Canary birds by looking at their physical appearance. They range from 10cm to 12 cm in length. Their wingspan measures between 21cm and 23.7cm. Males have largely yellow-green underparts and heads.

Their forehead, supercilium, and face are a little bit yellower. But the under tail-coverts and lower belly are somehow whitish with dark streaks visible on the sides. Also, the upperparts appear yellow-green with a few dark streaks. The rump on a wild Atlantic canary bird is dull yellow.

Females look more or less the same as males but their heads and breasts are greyer and duller with fewer yellow underparts. Juvenile Atlantic canaries are usually brown with a few dark streaking.

Domestic ones come in different colors which range from plain yellow, orange, grey to brown and blue. Some of them have curled features. Atlantic canaries feed on insects and seeds but their chicks feed mainly on insects. Their nest is made of straw, cobwebs, and moss. 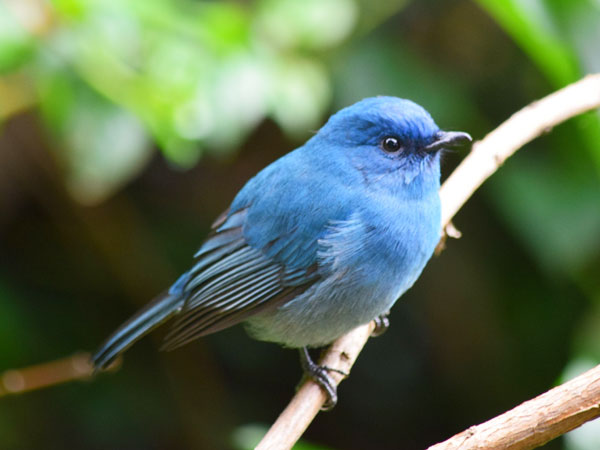 Most canaries in this category have distinctive features that set them apart. They have a yellow or white base color. These colors are usually tinted by some light. The light plays some tricks on you by making you see those colors.

This phenomenon happens more often when the birds’ feather hooklets reflect some light wavelength in a manner to cause the appearance of several colors.

The colors produced are usually purple and green tinges that are visible on starlings or magpies. In most yellow base canary birds, the resulting color is green but in white canaries, the color appears bluish-grey hence the term Blue Factor Canary. 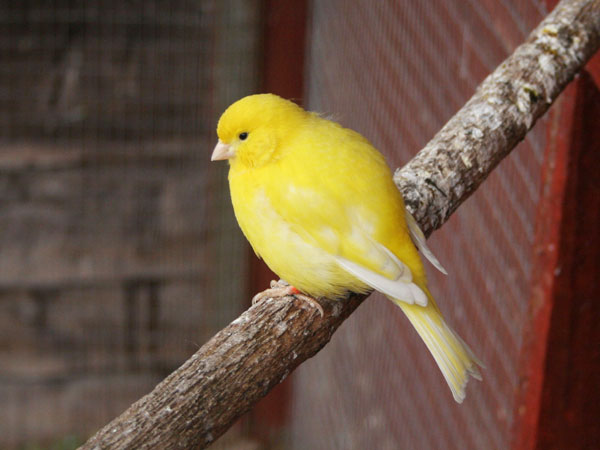 The most ideal length for a typical Border Fancy Canary is 14 cm. These birds are small and compact. They have round bodies with glossy plumage. The selectively bred English and the Scottish Canaries stand at an angle of 60 degrees.

Back to their plumage, these birds display smooth, glossy feathers. Also, their plumage is yellow but you can find them in a variety of colors. The colors include buff green, white, or cinnamon, which is either ticked or variegated.

Border Fancy Canaries are lively cage birds that produce a variety of melodious songs. You can easily mistake them for Gloster Canaries but you can easily identify them from their distinctive and more intense ‘chopper’ like type song.

These birds originated from the region of North-England and South-Scotland, hence the name Border Fancy Canaries. 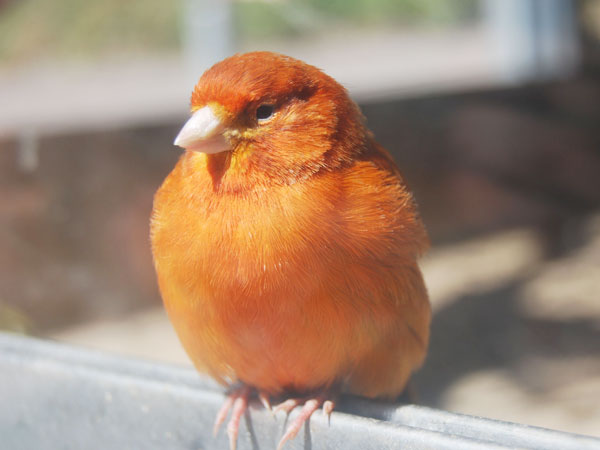 Cinnamon Canaries were considered a separate variety in England. But in the early 1900s, they were crossbred with a selected type of canaries-the Yorkshire, Norwich, and Border Canaries- to make their cinnamon color more prominent.

These canary breeds did not initially possess the same color intensity that brings out the true cinnamon color.

However, the Cinnamon Canary is identified with a variety of colors such as buff or yellow with some cinnamon red tone. But the ideal color of these birds is a dark, glowing red-brown plumage in the subtle blend of pink and softer browns.

These rare types of canaries are highly valued for their fine quality of plumage. Some pet owners believe the cinnamon canaries possess the finest and smoothest feathers of all cannery breeds. 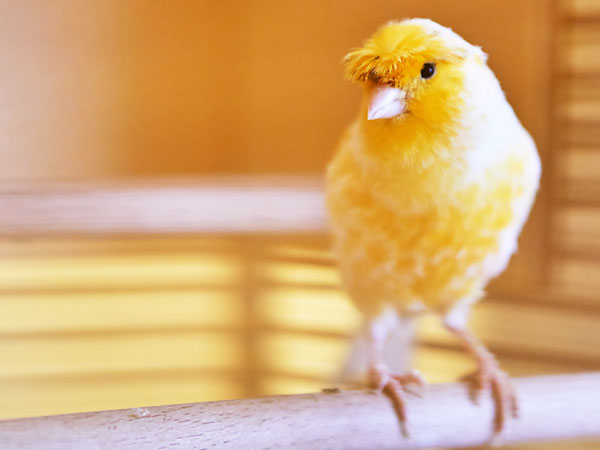 Crested canaries are loved by many pet owners and breeders for their physical characteristics. Their crests make them stand out from the rest compared to their color or song. This species is one of the canary varieties with a tuft of feathers at the top of their heads.

In the past, crested canaries were considered pets for the wealthy due to their popularity. As such, they were priced way above the reach of the ordinary population. Their numbers declined steadily due to their high demand by wealthy individuals.

Today most crested canaries are available in many different colors with great personality, and fun looks. They have a similar body shape to bullfinches with a body length of about 17cm.

Crested canaries can stand to a maximum height of 16 cm. They have short and broadheads with protruding foreheads. You can identify them from their moderately long necks and long, narrow tails that are in line with their backs. 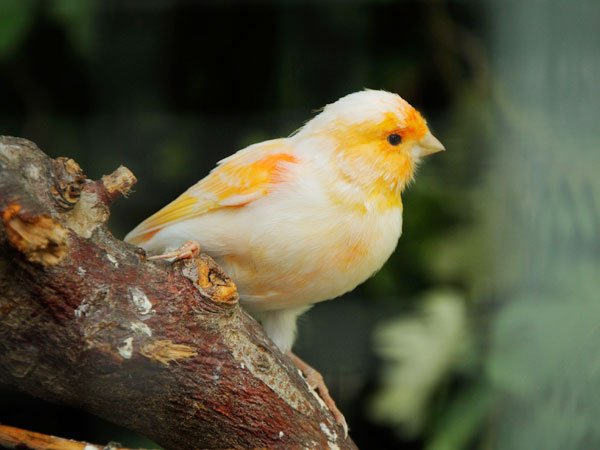 Domestic canary birds are simply referred to as canaries. These birds are the domesticated variety of the wild canaries. They are native to the Macaronesian Islands.

These fashionable pet birds were originally bred and raised in the royal courts of Spain and England before spreading to other areas.

Other names for these lovely birds include Spanish Timbrado, German Roller, Waterslager, and Australian Plainhead. An individual domestic canary can grow to a size of 12 to 20 cm in length. Their colors can vary from white, red, brown to black, yellow, and orange.

Additionally, they produce different types of songs including trilled, rolling, soft and loud songs. Their diet comprises grasses, seeds of figs, weeds, and a variety of plant materials including small insects. 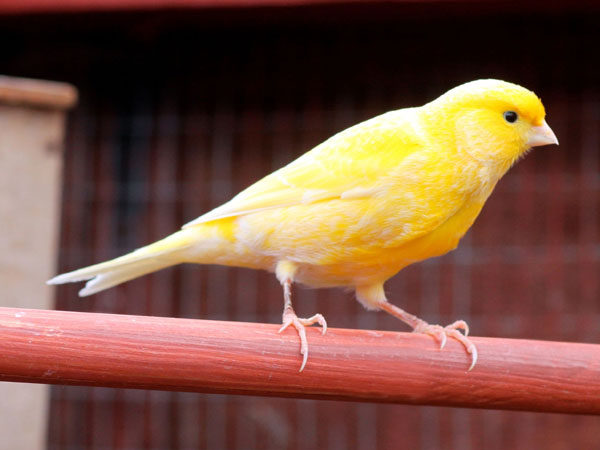 This is another popular type of canary bird that is loved by many pet owners worldwide. It is a miniature version of yet another canary type known as the Border Canary.

Fife Fancy Canary was initially bred for its physical attributes in the mid 20th century. Thanks to its name, the bird traces its origin in Fife, Scotland. It is 11.4 cm in length, making it the smallest type of canary bird known so far.

Originally spelled Gloucester, Gloster was first bred and raised in Gloucestershire, England. That is why it is known as Gloster Canary. This variety of canary birds was first bred in the 19th century. Today Gloster is one of the very popular show birds known among pet bird enthusiasts.

Gloster Canary is a short and squat bird. It measures about 12.1 cm in length. It is a combination of the Border, Hertz, and the Crested Canaries. Besides, it portrays a feather ‘wig’ which makes it unique among the canary varieties.

That’s the reason it belongs to a group of birds popularly known as Coronas thanks to the feather wig. Unfortunately, Coronas cannot be bred together because of their genetic complexities and inbreeding. 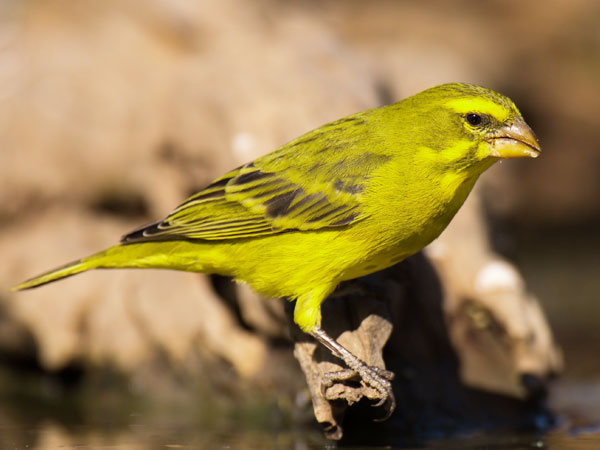 The green Canaries are part of the show birds. They are considered ‘green’ due to their appearance. They are characterized by their yellow base color complete with lots of melanin in their feathers.

It is the presence of melanin in their coloration that makes them appear either green or black. The same colors are also found in wild canaries of this category. 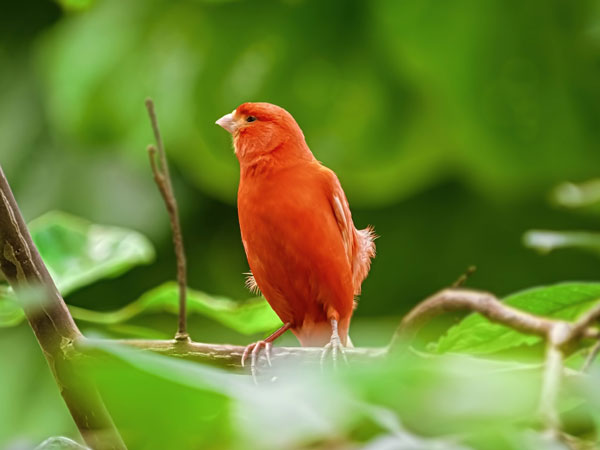 These birds also belong to the group of show birds due to their attractive colors. The Red Factor Canary is actually the red version of other types of canaries known as the Yellow Melanin.

Only that their color is red rather than being yellow. The red is their base color and it is accompanied by some traces of dark pigmentation. 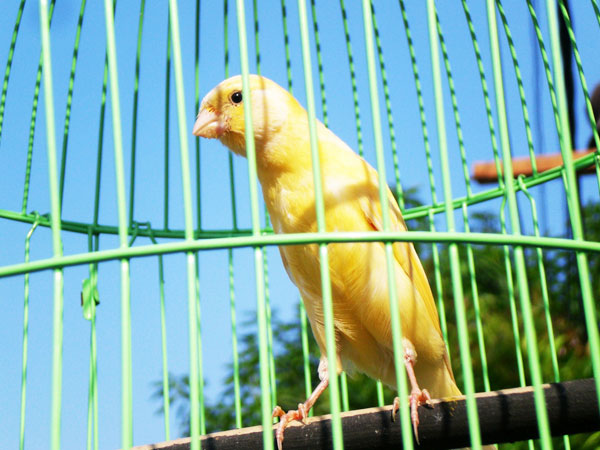 Scots Fancy Canaries are also known as the Scotch Fancy Canary, Scottish Canary, The Bird ‘o Circle, or Glasgow Don. You can identify them from their long, tapering bodies that create a curve resembling a half-circle.

This canary variety was developed in Glasgow, Scotland in the early 1800s. Its scientific name is Serinus canaria domesticus. The bird went almost extinct in the 1900s but it’s being preserved by some devoted breeders today. The Scots Fancy Canary can grow to a length of 18cms or slightly more.

Healthy greens can also be used to feed the Scots Fancy Canary. On top of that, fruits such as apricots and apples can supplement their diet by adding essential minerals and vitamins. 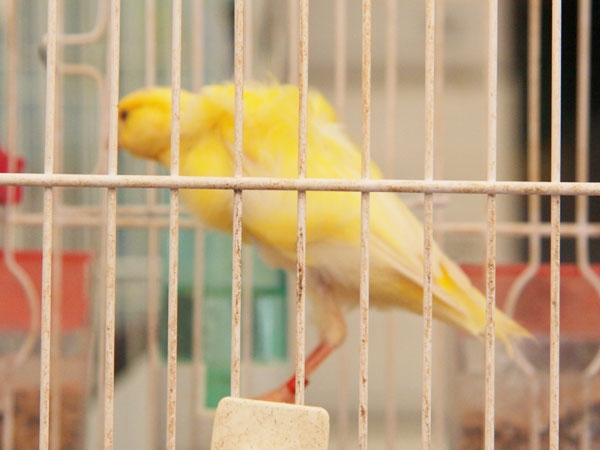 Swiss Frill Canary grows to an ideal length of 17 to 18 cm. This canary variety has a body shape that resembles a half-moon. It also has a long, narrow tail that complements the shape of the entire body. This means the long tail helps the bird to achieve its characteristic half-moon body shape.

Aside from that, Swiss Frill Canary has a small, oval-shaped head with a long, slim neck. Unlike other canary varieties, this one does not have frills. Instead, this beautiful bird has some feathers on its mantle. These feathers are long and straight, extending over two-thirds of the entire back of the bird.

Feathers around the crop area form the shape of a basket. Plus, they are well separated from the side of the body, giving the Swill Frill Canary its distinctive appearance. Most importantly, this bird traces its origin to Switzerland. 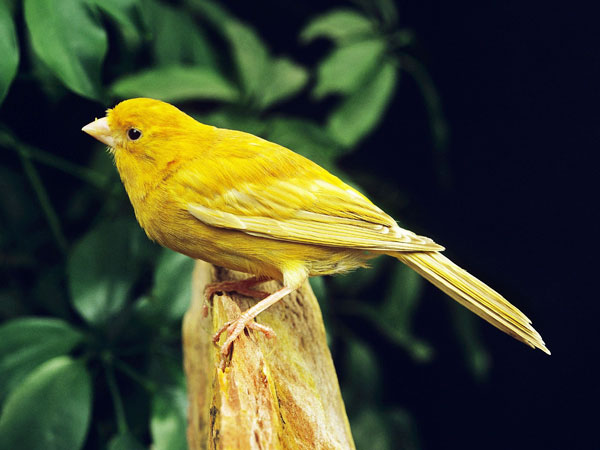 Yellow Canary is a large canary consisting of different-looking females and males. You can identify the males from their bright yellow underparts or yellow-green underparts. They also have well-marked face patterns.

This canary species is somehow different from the Yellow-fronted Canary because it lacks black facial markings. In addition to that, its bill is not as heavy as for other  African canary species. A typical Yellow Canary can grow to a length of 12 cm

At least you are sure about different types of canary birds. As you may have realized, these birds are considered family pets by many people across the world. This is due to the fact that they have some of the most desirable traits not found in other birds.

But the most common traits that breeders and pet owners find attractive are color, size, physical features, and songs. With this information at the back of your mind, you can make a sound decision on the type of canary you want to include in your collection of house pets.