Discus Fish and Goldfish – Can They Live Together? 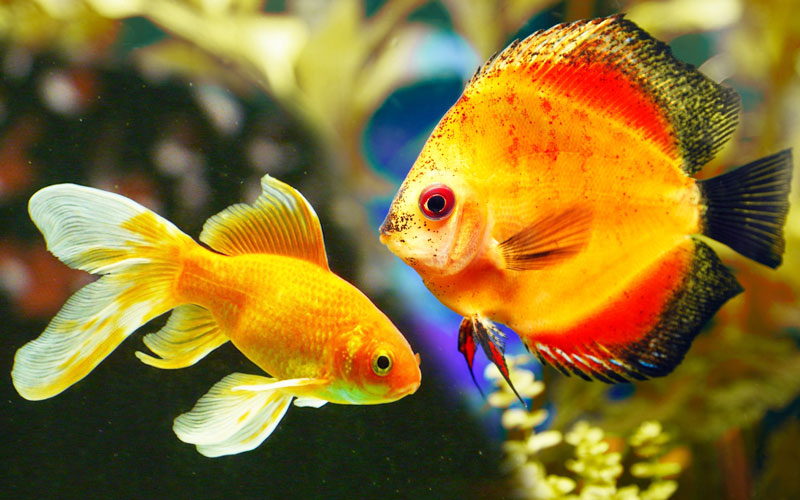 One of the main differences is that these two fish species are quite different. They have very different requirements when it comes to water parameters, especially the water temperatures.

Discus fish like much warmer waters, while the goldfish are more “cold-blooded”, meaning they prefer colder waters instead.

They produce incredible amounts of waste, while the discus fish don’t. Discus fish are also much shier compared to goldfish, which are quite flamboyant with their behavior.

There are also some other requirements that discus fish need which are not the most suitable for the goldfish. They need a much larger tank, and they need tank mates to survive.

Why You Should Not Keep Discus Fish and Goldfish Together?

Overall, it’s not the best combination and one you should avoid. Here’s why.

The biggest reason, and the elephant in the room is the temperature difference. The two are very much different in terms of water requirements.

Discus fish will need much higher temperatures in terms of water. They like to live in warm waters (82-88 degrees Fahrenheit), while goldfish like colder waters (68-74 degrees Fahrenheit). That is a massive difference indeed, and you simply can’t compensate for it.

Even if you would try to keep one of the two species happy, the other would suffer as a consequence. The temperature difference alone is the biggest reason why you should avoid this combination of fish species.

Goldfish are slightly more adaptable than discus fish, so they will adapt to different water parameters. However, they are also much messier than discus fish. On the other hand, the discus is a very petite type of fish who likes to have everything in order.

Goldfish will produce a lot of waste in your tank. That would stress out the discus fish massively, and you would constantly need to make sure to clean the water regularly.

This would require you to get a very powerful filter, but that’s not always good because the strong water flow is not the best for discus fish. Because of their messy nature, the goldfish are not great companions for the discus fish.

Here’s another problem: goldfish like to eat plants, which is very different to what the discus fish like. These fish like to hide between plants and they like to have a lot of plants in their environment.

If you pair these two, discus fish will suffer greatly. When they don’t have anywhere to hide and to swim around such as plants, they will get stressed out greatly. They will suffer as a result, and it would be your fault for that.

This is just another reason why these two fish are not good tank mates for each other.

Discus fish are very shy in nature. They like to hide a lot, and they like to be hidden for the most part. They are very peaceful fish, and they don’t like to be disturbed by other, more energetic fish.

That’s exactly what the goldfish are. They are energetic fish who like to swim around a lot and are very active in the tank. They are perfectly able to live alone, too. Discus fish, on the other hand, like to live in groups of at least 6.

Their behaviors are very different. They would not get along very well together, because the goldfish would stress out the discus fish with its active swimming and behavior.

Another problem of pairing these fish is their preferences when it comes to tank size. Namely, goldfish will like to live in a small aquarium of about 20 gallons, while discus fish prefer much larger tanks – of up to 50 gallons.

They will need such a large tank because you’ll need to keep several discus fish together, because these fish like to live in groups. Goldfish like to live alone, though, and 20 gallons is enough for them.

If you go for a large tank, it might not be the best for your goldfish. They don’t like exceptionally large tanks.

If you put them in a water that’s colder than that temperature, they will suffer a lot. Just after a few hours, they would get stressed out massively, and their physical health will start to crumble. They will get sick, their organs would stop working, and eventually, they would die out.

So you should not put your discus fish in a water that’s too cold by any means. You’re asking for trouble. This is also a great part of why these two fish species are not good tank mates for each other.

Can Goldfish Live in Warm Water?

No, goldfish will not survive for too long in warm water, too. Even though they are more adaptable than discus fish, they would also suffer in warm water.

They like slightly colder water – between 68 and 74 degrees Fahrenheit. And while they can adapt to slightly warmer waters, they would still suffer greatly in warm water.

Similarly, they would probably die out after a few days or hours in warm water. Their organism just wouldn’t be able to take it.

To conclude, discus fish and goldfish are not good tank mates for each other, and for many different reasons.

They have very different requirements when it comes to water parameters, and they also like different living conditions. What is more, they behave differently, meaning you should avoid this combination at all costs. 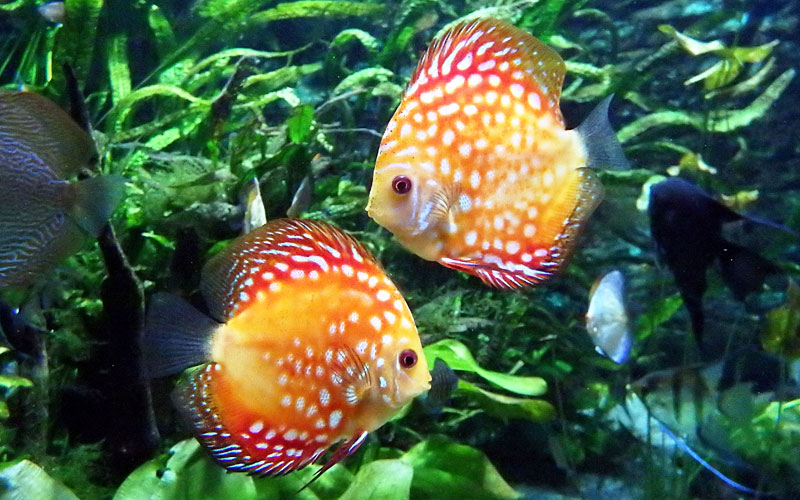 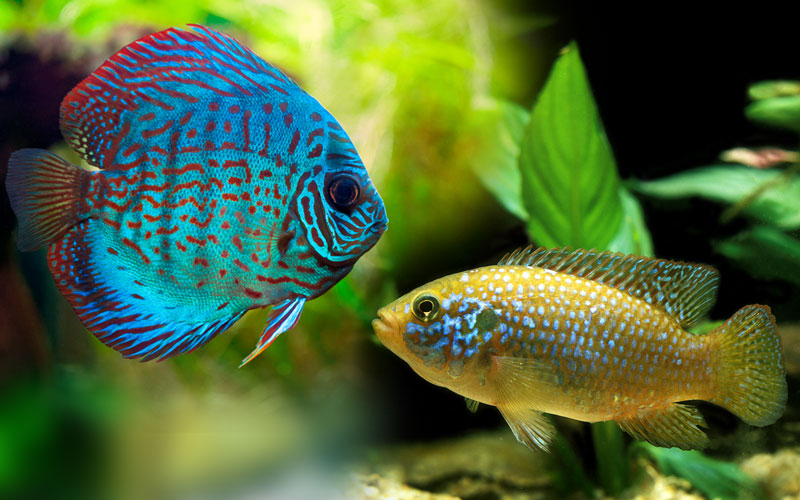 Discus Fish and African Cichlids – Can They Live Together? 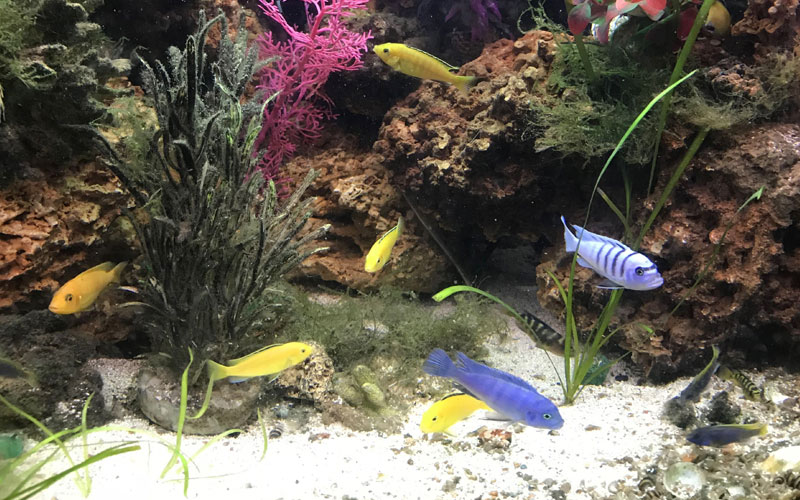 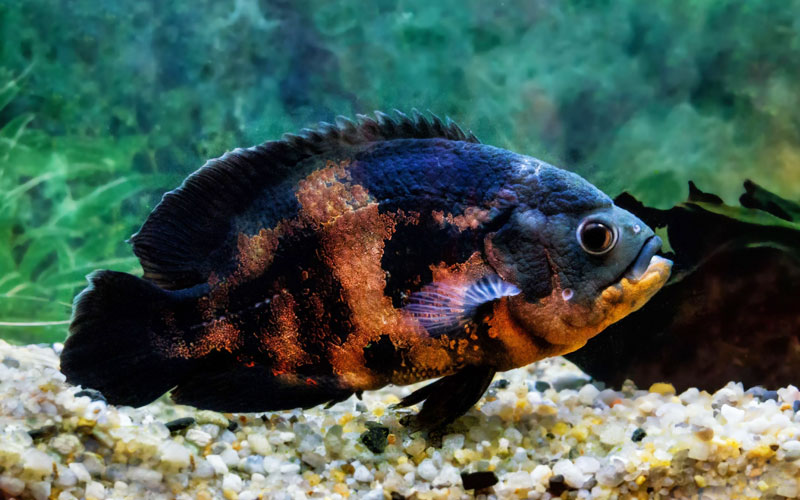 Why is My Oscar Fish Stressed?