Are Oscar Fish Aggressive? How to Stop Them Fighting?

Oscars are one of those semi-aggressive breeds that mostly target smaller fish with their aggression. There is no need to be concerned about this tendency of theirs if you keep them with compatible tank mates. Choosing tank mates is going to be easy, as they get along quite well with lots of other species. 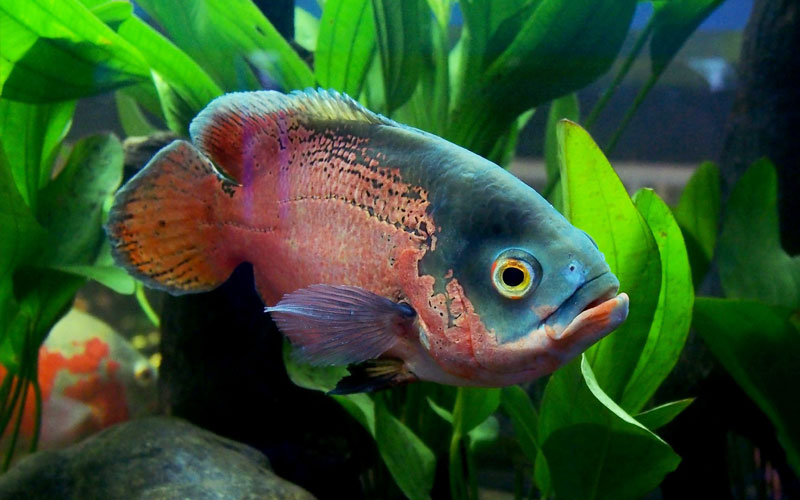 Moreover, most of the recommended tank mates for them are also aggressive. They can be mostly kept with territorial cichlids who basically keep the Oscar away with their aggression. When setting up a community aquarium with Oscar fish, it is all about keeping their temperament at bay.

They need lots of space and also a proper tank setup with accessories that break their line of sight.

Why do Oscar Fish Fight?

Oscar fish enjoy to undisturbedly swim around in the tank wherever they want to. If another fish interferes, they can get aggressive and start a fight. This doesn’t mean you can’t keep them with other fish. You just need to set up the tank in a way so that these fights won’t happen.

In a small and crowded tank, there is a much higher chance that your Oscar is going to fight someone. Once you decide to keep Oscars with other species, the best idea is to buy a big aquarium right away. For a single Oscar, you need a 55-gallon aquarium.

Every time you want to add another fish, also add 20-30 gallons to that number. The other thing that causes their aggressive tendencies to break to the surface is the lack of hiding places. Breaking their line of sight is a highly effective tactic in reducing aggression between one fish and the other.

How to Stop Oscar Fish from Fighting?

Is your Oscar fish fighting too much? Let’s take a look at the numbers then. For example, if you have 5 fish that are similar in size, then you need 55 gallons plus four times 20 gallons. You need a 130 to 140-gallon aquarium.

That’s the minimum, otherwise your fish are going to have a lot of territorial debates and bully each other. Also, don’t shy away from adding some extra hiding places. Maybe you only need a couple more plants, some rocks and driftwood.

Sometimes, they only need a few more hiding places in order to stop fighting. You can add some cool decorations as well. The point is to break their line of sight so that all of them can have some private space.

Can Oscar Fish Kill Each Other?

It is important to know that aggression between fishes can not only cause stress. They can do some serious harm to each other, especially Oscar fish. If the aquarium is not properly set up, there will be serious injuries in the long run.

In the aquarium, your fishes are constantly going to run into each other, causing even more injuries. Thus, they won’t have time to heal. Constant stress and injuries also make Oscars prone to various diseases. Some of those diseases are not easy to cure at all.

This is why it is crucial to prevent aggression in a community aquarium.

The rule of thumb is to go for the species that are either similar in size or bigger. They won’t get as intimidated by the presence of the Oscar fish. Plecos are particularly good tank mates because they spend most of the time in the bottom layer of the tank. Oscars, on the other hand, are usually above them.

Cichlids that are good tank mates are Firemouth, Convict, Red Devil, Jaguar, female Flowerhorn, Jack Dempsey, Green Terror and Texas Cichlids. Keeping them with Silver Dollars is also a great option. They are schooling fish so it is better to keep them in a group.

They hide most of the time, yet they can be really fast so it is no problem for them to get away from the Oscar.

Although the Oscar is semi-aggressive, it is still not on the level of African cichlids. Pretty much all African cichlids are hyper aggressive. If you would put them in the same tank with an Oscar, they would probably bully him to death.

If you keep different species of African cichlids together, it is a different case. After all, they live in the same lake together and it is easy to keep their aggression at bay. Keeping species from different continents is not a great idea in general.

For example, a disease carried by an African cichlid might not be that big of a problem for another African one. But if an Oscar would get it, there would be serious consequences. Your Oscar would get very sick and some of these diseases can even be fatal.

We can conclude that Oscar fish can definitely be aggressive, but they are not the most aggressive ones. As we mentioned in this article, there are African cichlids for example who are far more aggressive. They can even kill your Oscar if you would keep them together.

Nevertheless, there are plenty of good tank mates that can live with your Oscar without much conflict. Most of them are other colorful cichlids that look great in a community aquarium. If you are having problems managing the aggression of your Oscar, then just re-arrange the tank and put more accessories in it.

Breaking the line of sight of your fish is one of the most effective methods when it comes to managing aggression. Although keeping aggressive fish at home is kind of a next-level thing, we thing you just need to do the research.

With this article and many others, we encourage you to keep some more demanding, yet beautiful fish in your aquarium. It often comes down to a few simple tricks to keep your fish happy and unharmed. 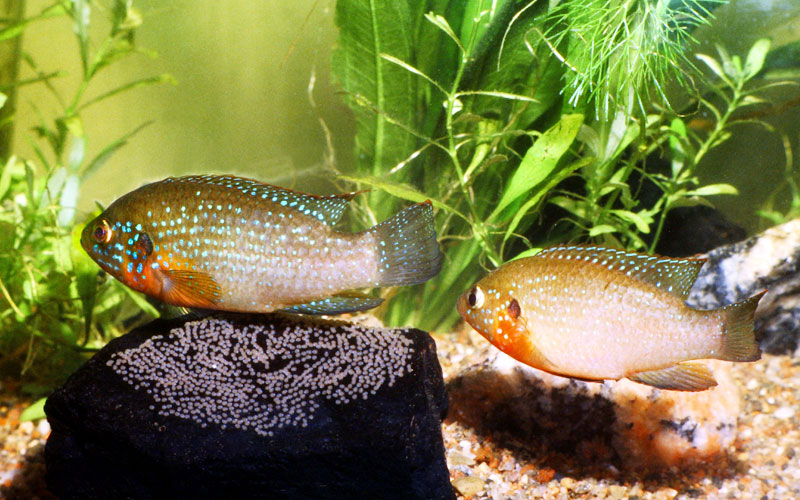 What is the Best Temperature for Breeding African Cichlids? 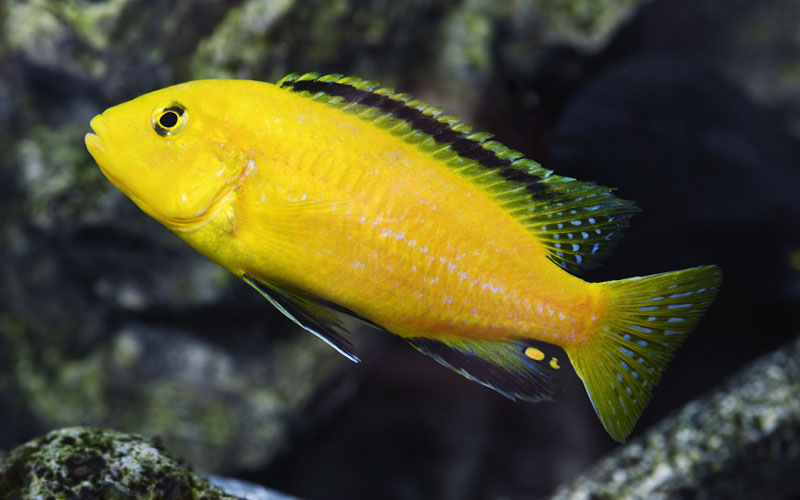 African Cichlids Lifespan – How Long do They Live? 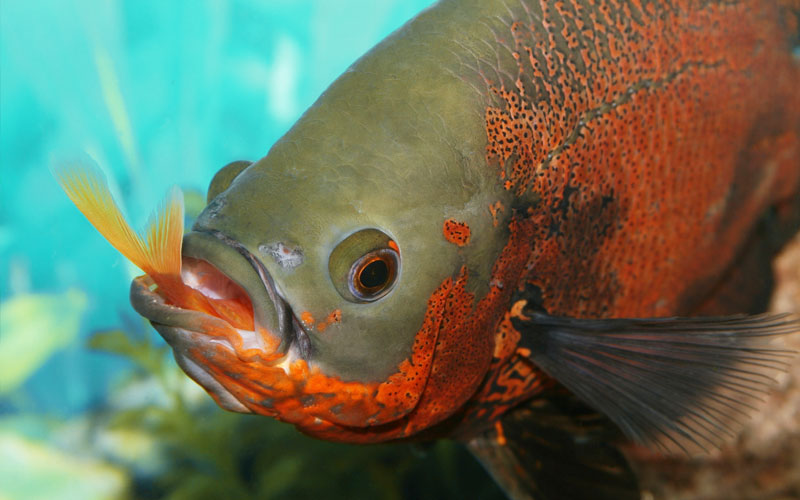 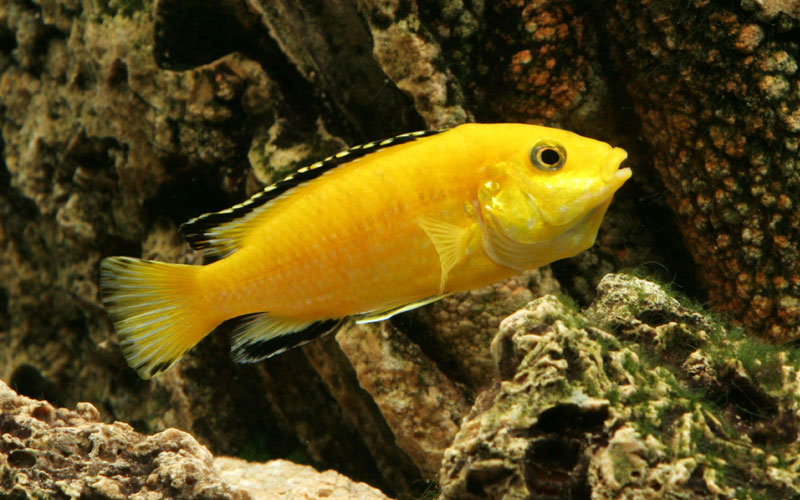 Is My Mbuna Cichlid Holding Eggs?