The key to keeping Oscar fish together with other tank mates is to have a huge tank, have various types of fish and add hiding places. 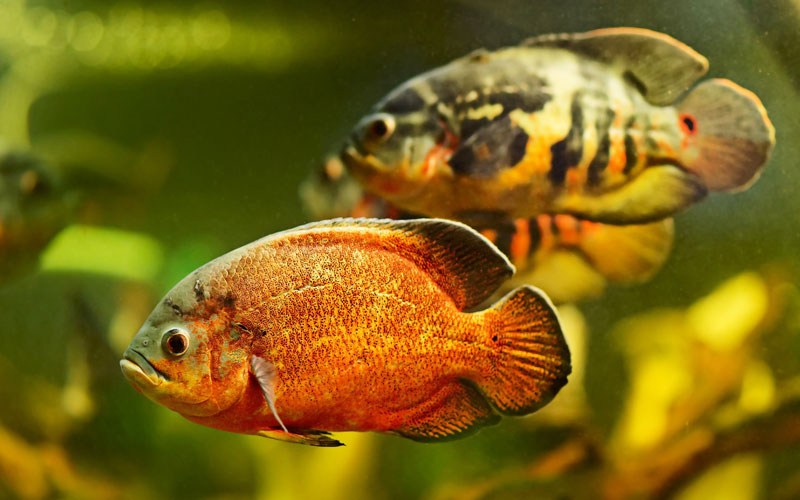 If you can provide these, you will be able to keep Oscars together with the following list of fish

In the list below, we are going to talk about a lot of aggressive fish that are compatible with Oscars. This is not something you should worry about because there are many ways to deal with aggression between tank mates.

Nevertheless, they are all beautiful and colorful fish. In fact, one of the main reasons why the smaller ones can deal with Oscars is their aggressive temperament. There are also less aggressive fish you can keep them with such as the Silver Dollar. 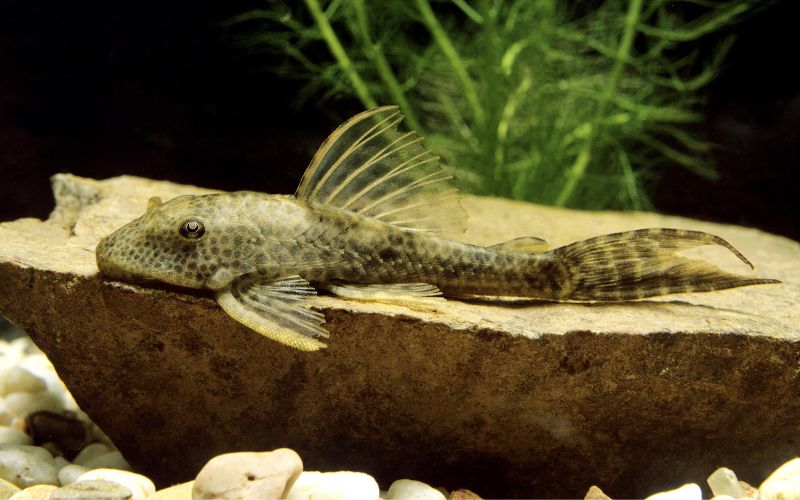 The Common Pleco is one of the most popular fish among fish keepers. It is only slightly bigger than the Oscar on average and is considered as a cleaner fish. All Plecos are bottom-dwellers, swimming around in the lower layers of the tank and looking for leftover foods.

What makes them compatible with Oscars is that they don’t bother each other. They just mind their own business in the different layers of the tank. The Common Pleco is actually a type of catfish and it looks amazing with the net-like pattern on its brown body.

Their colors can vary depending on which area the Pleco is from. Since they are nocturnal, you are going to see them being active only during the night. 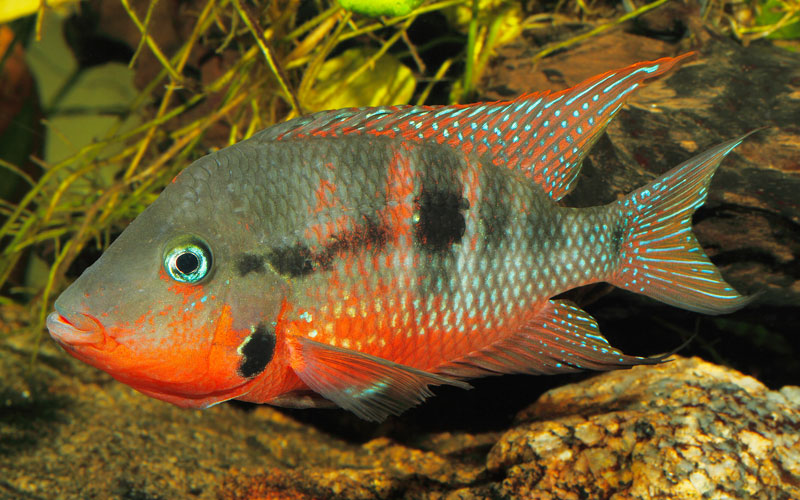 A Firemouth Cichlid can be a decorative addition to any home aquarium. That vertical black and white striping with the orange or bright red underneath wins the attention of many fish keepers. Firemouths might look like they require some special care but in reality, they are easy to care for.

When it comes to tank setup and water parameters, this species will surely feel at home in an Oscar tank. They are compatible in terms of diet as well. No matter what type of food you drop in the tank, Firemouths will gladly eat it. They are omnivores, and pickiness is not one of their traits.

A Firemouth is not shy, as it comes from a semi-aggressive family of cichlids. This makes them able to defend themselves against Oscars who usually bully the smaller and weaker species. 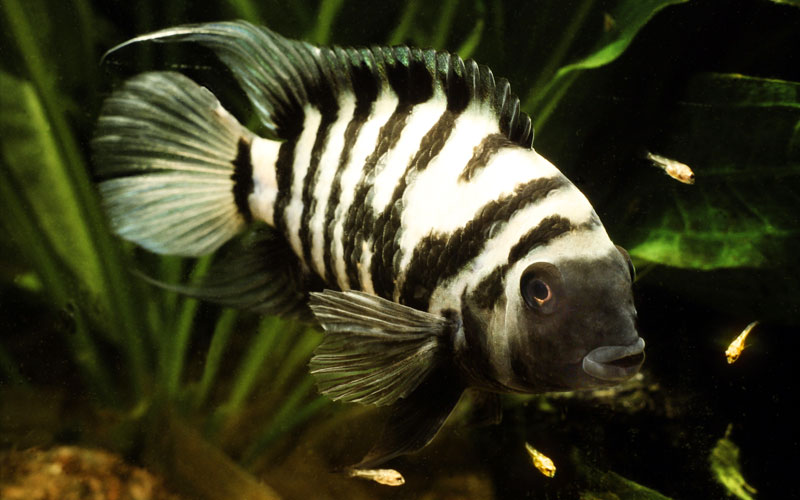 The other common name of the Convict Cichlid is Zebrafish, which describes its appearance quite accurately. Although even smaller with its 6 inches than the Firemouth, the Convict is significantly more aggressive. Your Oscar won’t even think about bullying this little guy after the first few encounters.

This is one of those cichlids that we gladly recommend for beginners because they don’t require much care. What Convicts do is they establish a territory and then guard it, swimming around their cave, a rock or around plants.

They are always full of energy but are not likely to have any serious conflicts with Oscars. Their ideal diet is similar to what Oscars usually eat, except that Convicts need a bit more vegetables. 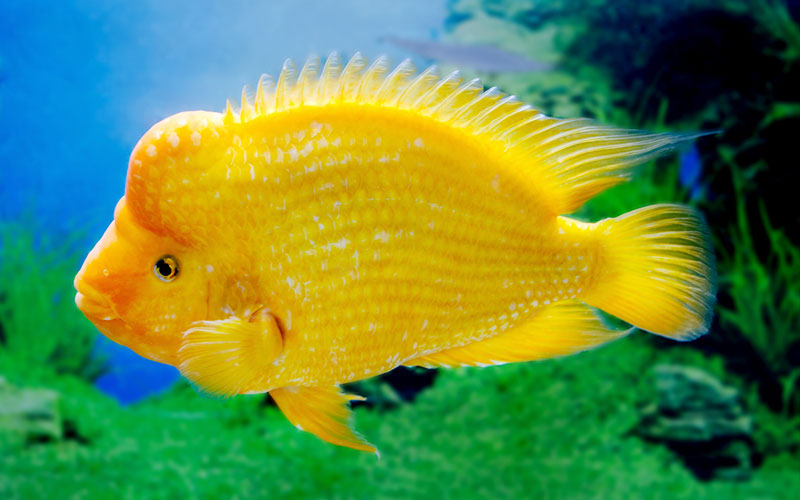 Red Devil Cichlids can flourish in shades of orange, red and pink with white patches here and there. As their name suggests, they are rather aggressive. This species is only slightly smaller than the Oscar. If you want to introduce the Red Devil in the tank, then you need a significantly bigger one than the recommended size.

Both of these species need enough space to be able to avoid each other comfortably. Red Devils viciously defend their territory, while the Oscar fish likes to wander wherever he wants to. In smaller tank, it often seems like the Red Devil becomes aggressive out of the blank.

This happens because the Oscar, minding his own business, swims into the Red Devil’s territory who gets really angry. This describes the typical relationship between them. But if the tank is big enough, it is much easier to keep them together. 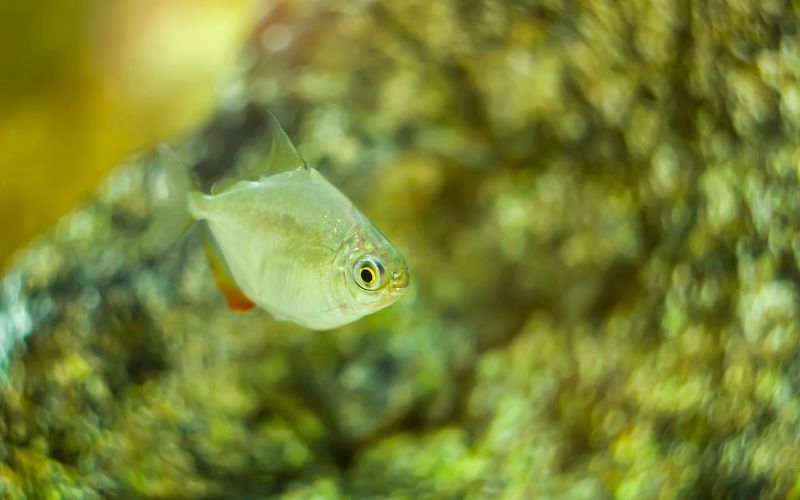 Silver Dollars are rather unique with their plain silver color and round body shape. This species reaches 5-6 inches in size once it becomes an adult. That is still not small enough for the Oscar fish to eat it. Silver Dollars need the safety of living in a group, otherwise they are more prone to stress.

Therefore, it is best to keep at least three of them in the same aquarium. The Silver Dollar is the type of shy species that will spend a lot of time hiding, especially if he feels threatened. This is why it is an imporant part of the tank setup to lay down some rocks, driftwood, plants and caves.

Your Oscar is not going to be able to do any harm to these fellas, as they are really fast swimmers. 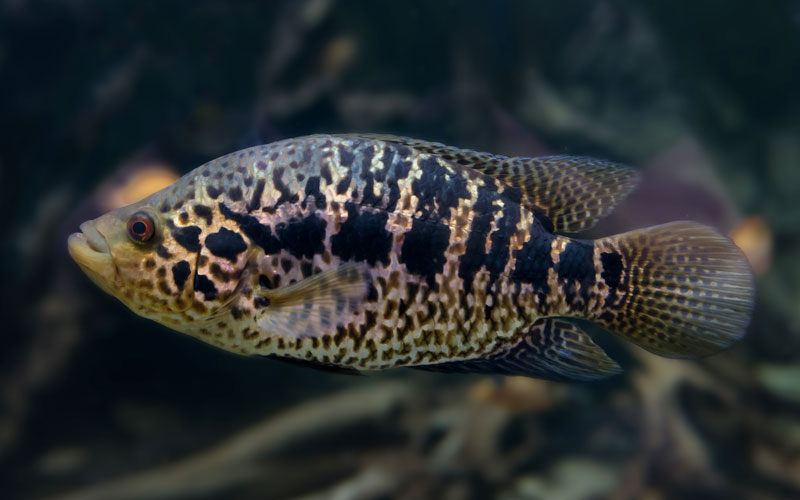 The Jaguar Cichlid has an interesting pattern that almost perfectly resembles the one of a real Jaguar. Just like the Red Devil cichlid, this one also has an aggressive temperament. This is also what helps him cope with the presence of the Oscar fish.

The important similarity when it comes to their diet is that both the Jaguar and the Oscar likes to eat small fishes. Jaguars are strictly carnivorous and you can give them various meat-based foods. Fish keepers often feed them beef heart and live or frozen insect larvae.

Oscar fish and Jaguars thrive in the same water parameters and you can light-heartedly keep them together in the same tank. 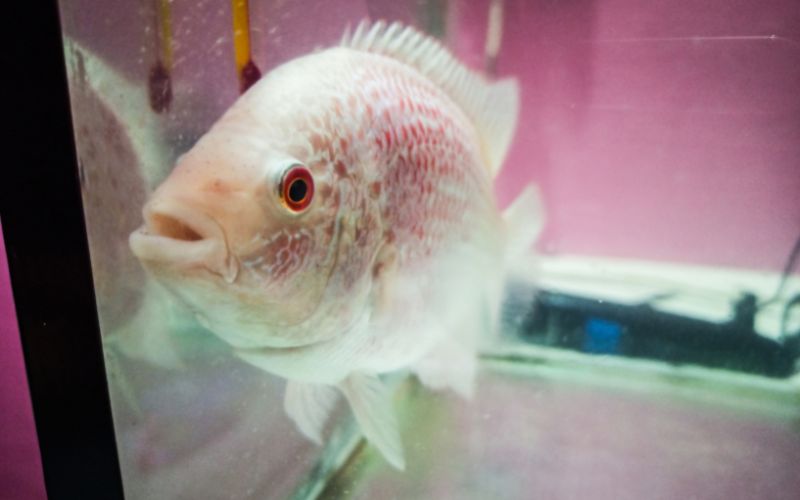 If you are looking for a unique and interactive fish to keep with your Oscar, then you can’t go wrong with the Female Flowerhorn. This species is particularly aggressive and there are not many other fish species they get along with.

For this exact reason, your best shot is probably to pick a Female Flowerhorn as an Oscar tank mate. They are particularly aggressive during the spawning season, which is simply not going to happen if there is only a female.

When it comes to their appearance, what makes them unique is the combination of red, white, purple and black patterns on their body. Males are more colorful but also more aggressive. 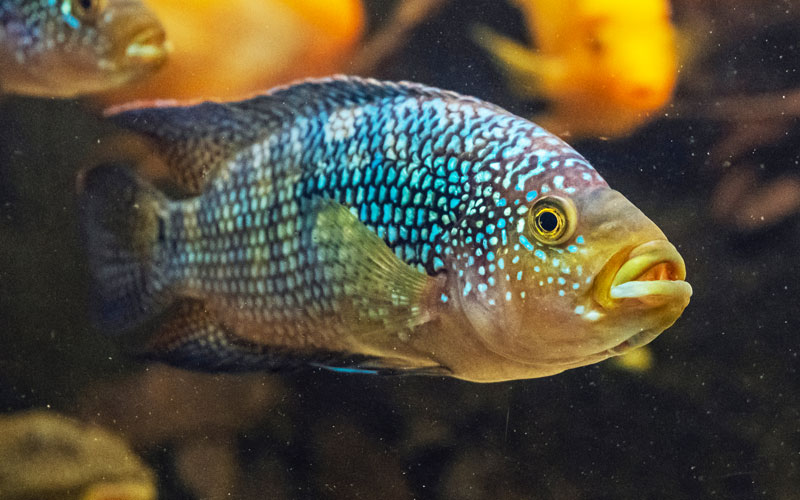 People absolutely love the Jack Dempsey for the bright blue and green iridescent scales covering its body. This fish looks amazing, it is accessible to everyone and also compatible with the Oscar fish. With its 10 inches maximum size, it is simply too huge for your Oscar to eat it.

Instead of swimming away from Oscars being scared, they rather join them in eating smaller fish. Jack Dempsey is another species that is well-known of this dietary habit. Although they might not seem aggressive, they certainly will be if someone invades their territory.

Therefore, you will either need to divide the aquarium or buy a really big one if you want to keep them together. 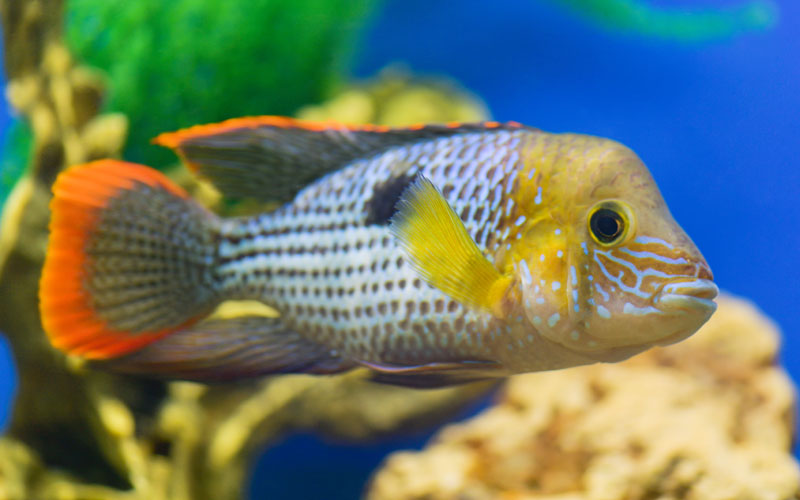 Although the name of this species is Green Terror, it is not exactly green. Scales of different metallic colors cover their body such as shades of green and blue. The main thing the Green Terror is sensitive to is water quality.

If you manage to keep the water parameters consistent and perform frequent water changes, this fish is going to feel great. Comparing the size of the adult Green Terror to the adult Oscar’s, they are almost identical.

This species can be aggressive, especially during the breeding season. Since they are omnivores, you need to provide them with a balanced diet of veggies and meats. 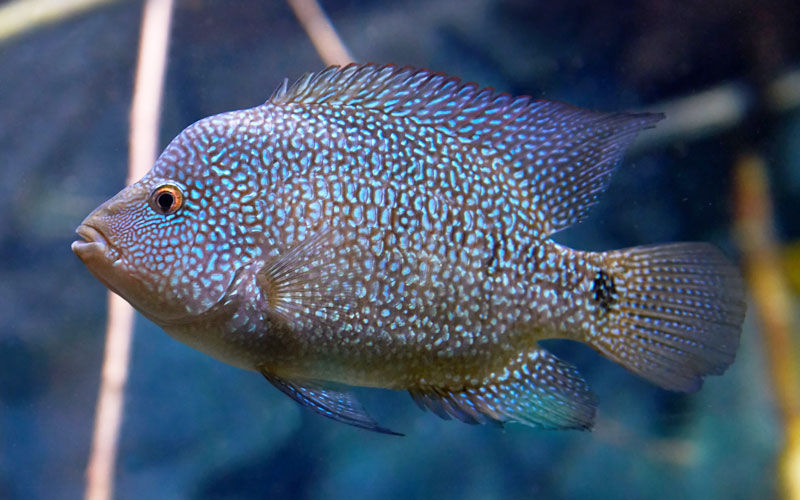 Texas Cichlids are also similar in size when compared to Oscars. Like the other cichlids we talked about in this list, this one is also aggressive. If you keep them with Oscars in a big tank, then the chances of them getting into territorial disputes are going to be lower.

You can further help the situation by cutting their line of sight with plants, caves, rocks and other decorations. It is definitely worth it to get a Texas Cichlid because of its amazing light purple scales and black dots.

Their lifespan is also worth mentioning, as they are able to live up to 13 years in good conditions. Since they are omnivores, you can feed them the same foods you give to your Oscar.

Obviously, if you want to keep your Oscar with other Oscars, that is also manageable. In fact, setting up a single-species aquarium is probably your safest option.

Keeping Oscars with other species is definitely not going to be easy. We don’t recommend it for beginner fishkeepers but if you feel like you have the experience for it, then go ahead. The species we mentioned on the list are all wonderful and going to make your aquarium amazing.

Also, every one of them requires similar water conditions and there are many similarities in their diet too. You can literally set up a rich community tank with them and feed all of them the same few foods. There are various commercial cichlid foods that are ideal for all the abovementioned species.

Hopefully, this article has helped you to pick the best Oscar tank mates for your new community fish tank. 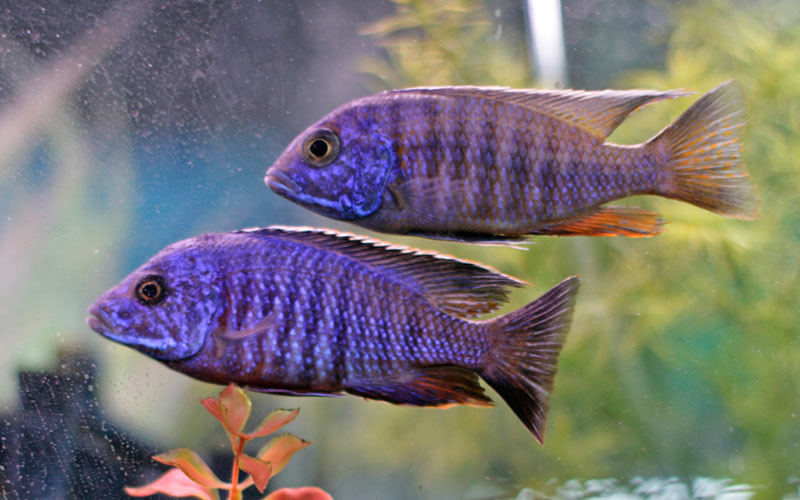 5 Best Food for African Cichlids – What do They Eat? 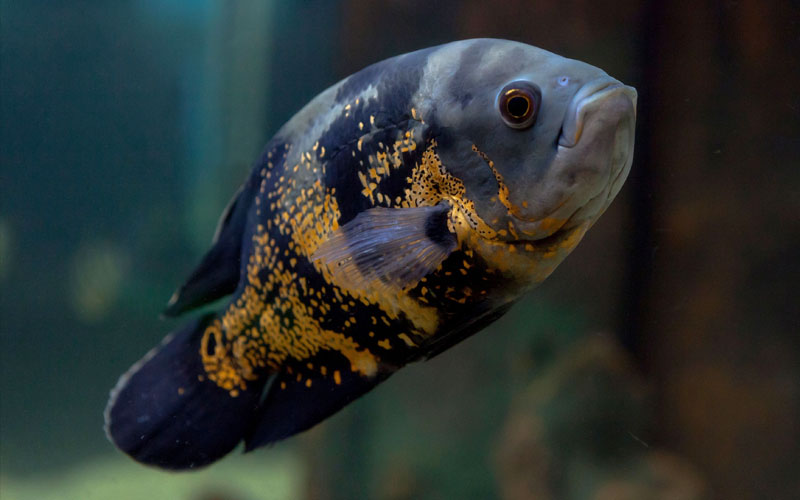 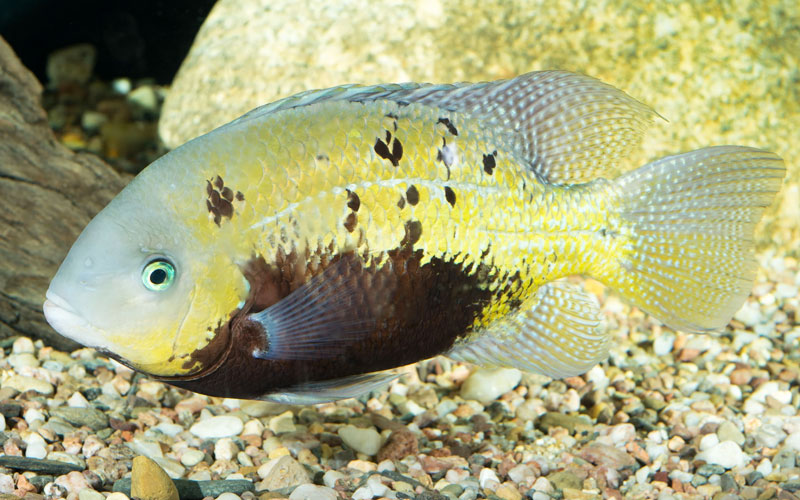 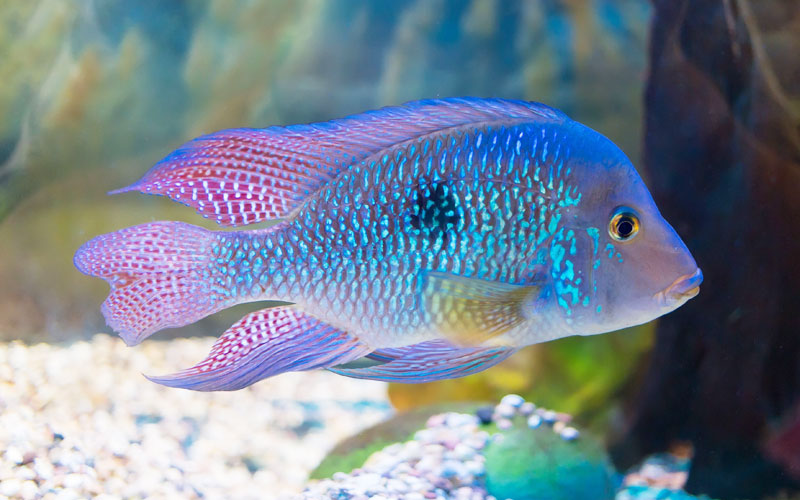