If you are planning to get a turtle as a pet, you might want to know which species should you choose. Turtles are a very popular reptile among pet owners, however, choosing a turtle breed is not always easy. 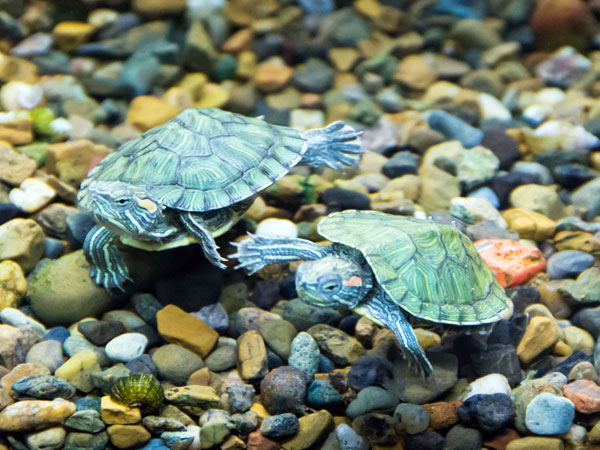 In this article, I’ve compiled a list of the 10 best turtle species you can keep as a pet. Whether it’s the behavior, diet, appearance, size, and weight, these turtles make for the finest pets.

Without further ado, here we go! 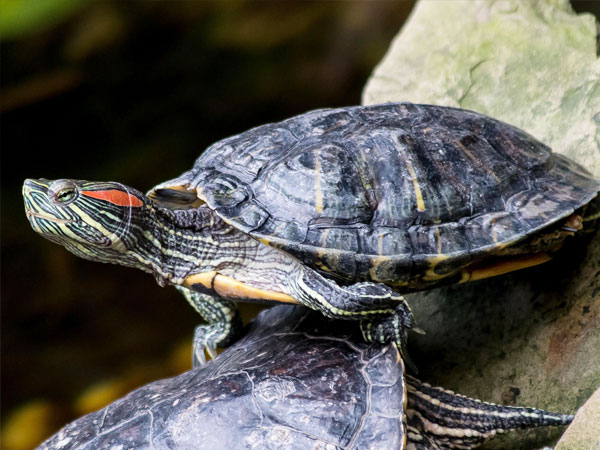 At number one, we have the Red Eared Slider, a very popular aquatic turtle that’s widely available and friendly. This turtle is more sociable than most of its peers, and it can even break bread with other pets like cats and dogs. A Red Eared Slider is very active and dynamic, and they only grow to about 12 inches long. Its weight is about 240g as an adult, making it a lightweight turtle.

You’ll want to keep this turtle indoors, in a warm environment, and with precise sanitation. During summer, you can take your turtle outside and toss it into your backyard pond, if you have one.

You’ll need a water filtration system and UVB lighting to keep a Red Eared Slider healthy. Its diet is a bit more expensive than other turtles, with algae, leafy greens, and even meat being a standard staple in the Red Eared Slider’s diet. Generally, this turtle lives past 50 years if you take good care of it! 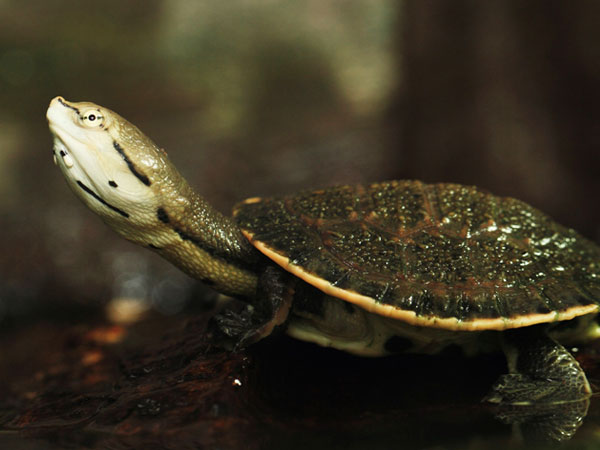 This turtle perfectly summarizes the meaning of the “turtleneck” expression. It has a long neck that can’t fully retract in the shell. Moreover, the African Sideneck Turtle has distinct anatomy compared to most of its peers.

The shell is streamlined, with a slick appearance. Most pet owners like the unique appearance and the small size of these turtles, so the African Sideneck Turtle is one of the most popular turtles out there.

A regular African Sideneck Turtle generally grows to 9 inches long, and it lives approximately 50 years. Their caretaking needs, however, are quite high. You need to maintain a clean environment, with a good filtration system, and a UV light that maintains a temperature above 70 degrees Fahrenheit.

Their tank should be at least 75 gallons, and their diet must contain plenty of Vitamin D3 and A. Most Sideneck Turtles are quite curious on their own and they won’t hide away when you approach. 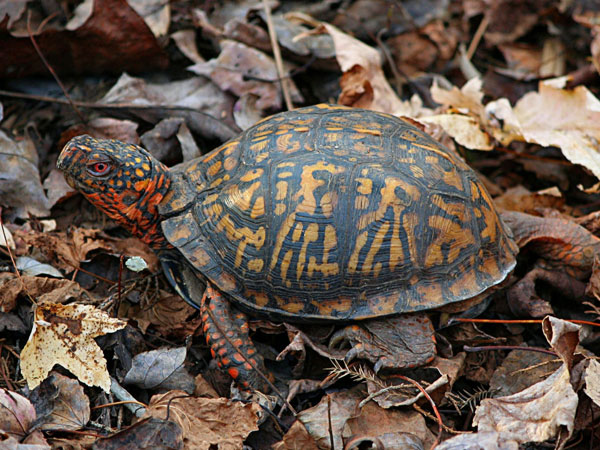 A highly adaptable turtle species, the Eastern Box Turtle can live both indoors and outdoors. However, you’ll need to accommodate your pet in a humid environment like a shallow body of water.

A moist substrate is also necessary for their optimal comfort and health. Finally, a UVB basking light helps the Eastern Box Turtle remain warm and avoid respiratory infections or hypothermia.

A cold and dry environment is very bad for any turtle, but especially for the Eastern Box Turtle. An adult turtle is only 5-7 inches long and can weigh up to 900g, yet its life expectancy is a bit lower, at 30-40 years in captivity.

Baby Eastern Box Turtles have a varied diet, with animal materials being their staple choice. As adults, though, their diet becomes mainly herbivorous, with fruits, fungi, seeds, and grasses offering an optimal diet. As for their behavior, Eastern Box Turtles are quite shy but if you’re good with them, they’ll become more active. 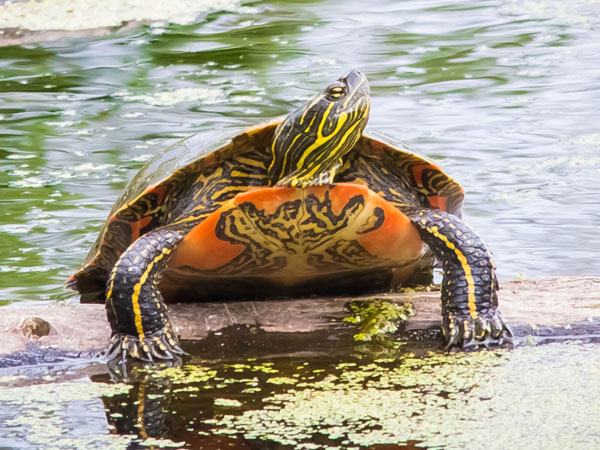 This one is quite a looker! Their shell markings are very intricate and mysterious to gaze at. It’s a very appealing turtle that’s unique-looking and quite small compared to its peers. It can get to 10 inches long, and it can weigh between 450-1100g.

Though not big, the Western Painted Turtle still needs a spacious tank or pond, with a good filtration system and a warm basking light. These turtles need warm temperatures to be active and healthy.

You can feed it greenery, seeds, fruits, vegetables, and even live animals, as long as they’re small enough. Its behavior is rather shy, and it won’t like constant handling. A Western Painted Turtle is like a painting you admire but never touch, almost.

While it likes being fondled from time to time, this turtle isn’t very sociable. Considering it lives for about 50 years, you’ll learn to appreciate this little fellow! 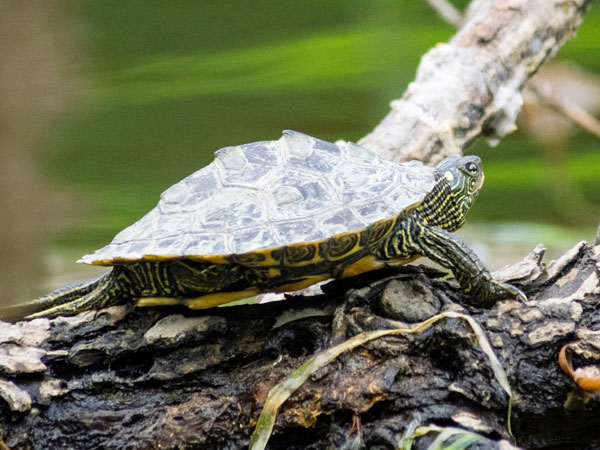 This tiny fellow only grows to 5 inches long as a male, while females are double that. People love these turtles of the unique-looking dorsal fin that runs along their shells. Its pattern is quite something to look at!

Their enclosure doesn’t need to be as big as other turtles, thankfully. If you don’t have enough space for a pet, the Mississippi Map Turtle may be your best choice. Make sure you have a water filtration system and a good UV lamp that maintains a constant warm temperature.

Its omnivorous diet means you can feed it both plants and small animals like insects and even mice. Green vegetables, fruits, seeds, fish, commercial feed, anything works as long as you diversify it enough.

A Mississippi Map Turtle doesn’t live as long as other turtles, though. It rarely lives beyond 30 years, which only means you’ll get more attached to it. Though, it may not reciprocate your affection since it can easily become stressed. Keep handling to a minimum and you’ll have a happy turtle pet! 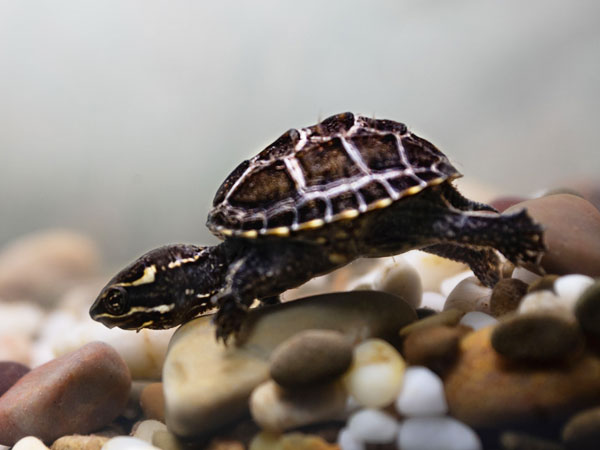 This turtle stinks like hell. When it feels threatened, the Common Musk Turtle turns into a skunk and releases the foulest odor you’ve ever smelt. Still, people love this turtle to the point where it became one of the most popular turtle pets.

It’s small, reaching up to 3-5 inches in length, and it doesn’t require extensive care like other turtle species. Still, make sure you put a water filtration system in its aquarium that keeps the water clean. Sanitation is always necessary for any pet turtle!

A Common Musk Turtle is quite feisty and aggressive at times. It won’t take much before it releases its chemical attack, so be careful. They’re also not very good swimmers, so make sure the water isn’t too deep in their tanks.

Ideally, they should be able to get out of the water easily, to bask under a UVB light. Their diet is very accessible, as well, with plant materials being their staple choice. Seeds, fruits, vegetables, greenery, and even live animals work out wonderfully. 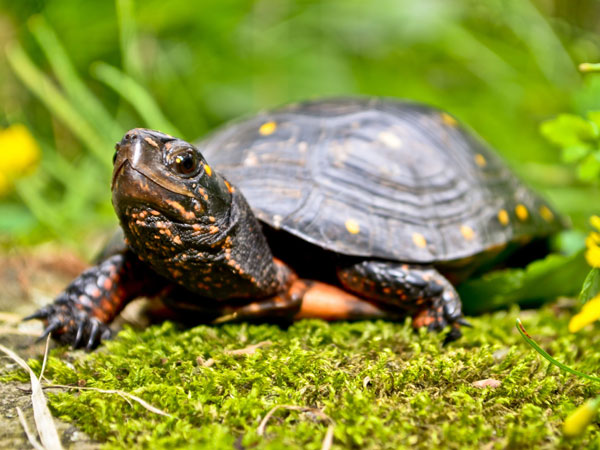 Yet another small-sized turtle, the Spotted turtle only reaches 4-6 inches in length. Its yellow spots are nice to admire, as well. And it’s not only the shell that’s spotted but their heads and limbs as well.

You can place a Spotted Turtle both indoors and outdoors, though you’ll need the proper accommodation for it. A big enough aquarium with shallow water is great since the Spotted Turtle isn’t a great swimmer. Install a warm basking platform where it can get some R&R from time to time!

The ideal diet for a Spotted Turtle is a variation of meat and vegetables. Feed it fruits, leafy greens, and small pieces of meat to keep its health optimal. In fact, the Spotted Turtle is one of the few turtles that eat a lot of meat, despite being an omnivore. Though, greenery is essential for the abundance of minerals and vitamins, especially vitamin B3 and vitamin A. 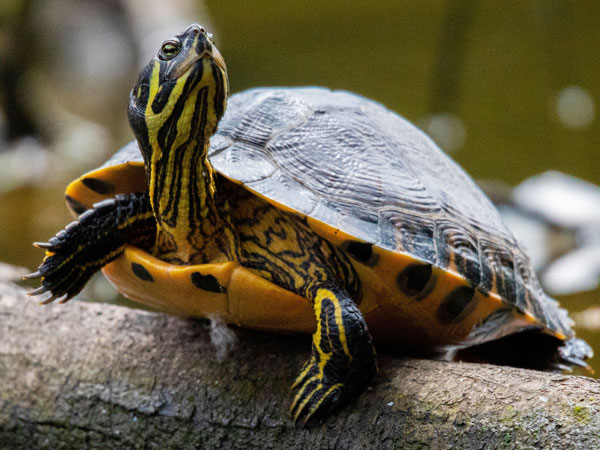 Who doesn’t want a turtle with a yellow belly? This is the most colorful turtle on our list, no less. It has a sturdy health and won’t fall ill if you offer a varied diet. The Yellow-Bellied Slider needs a big enough enclosure, of about 70 gallons of water, with UVB lighting to warm itself.

You’ll also like the fact that this turtle is very active during the day. So, you’ll be able to observe it swimming and moving around with no issues. Many other turtles are nocturnal, and they don’t make it easy for you to observe them.

The Yellow-Bellied Slider grows to 5-9 inches as a male and 8-13 inches as a female. It lives to 40 years, approximately, being one of the shorter-lived reptiles on our list. Its diet is mainly herbivorous, though make sure you also include meat in its diet.

A turtle needs a lot of vitamins and minerals, especially when it starts hibernating during the cold season. If you keep your turtle outdoors, hibernation is something you have to account for. 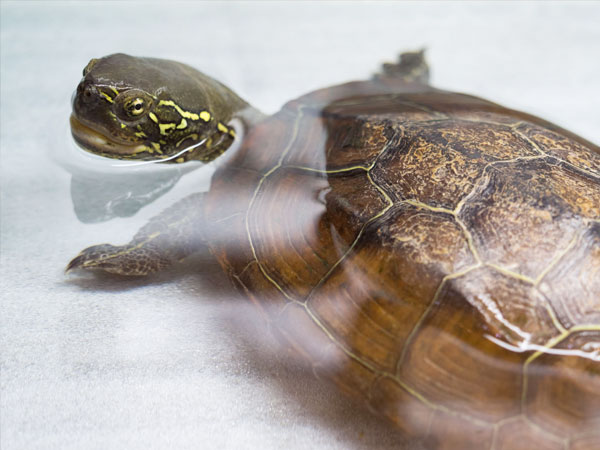 Reeve’s Turtle is the friendliest and most active turtle on this list. Unlike its peers, this one actively seeks out petting and handling. Though, don’t overdo it because Reeve’s Turtle is still a turtle. Excessive handling can stress it out and anger it.

You don’t want to be bitten by an angry turtle, do you? I thought so. When it comes to caretaking needs, think of the Red-Eared Slider, but also remember that Reeve’s Turtle is smaller. So, it won’t need such a large enclosure.

Sadly, Reeve’s Turtle is also the most short-lived turtle on our list. It only lives for about 20 years, but this means you’ll enjoy time with it even more. Its diet consists of greenery, seeds, fruits, and even thin slices of meat that you can spare.

If you feed it accordingly, your Reeve’s Turtle should grow to a full 6-9 inches in length. In terms of appearance, this turtle has a very thick neck and sturdy clawed legs, so it looks more like a tortoise than an aquatic turtle. 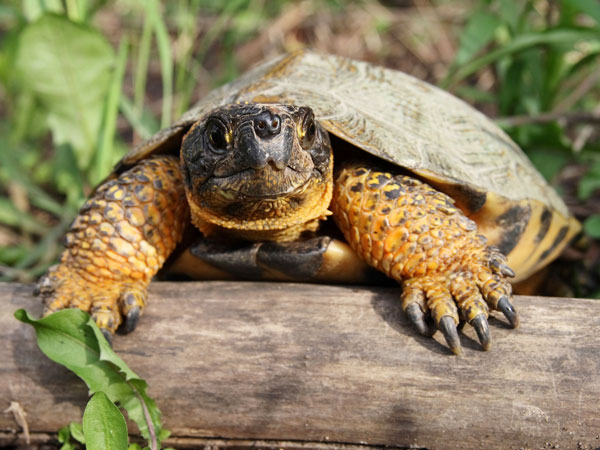 The second most friendly turtle on this list, the Wood Turtle is also one of the cutest reptiles here. It’s very friendly, as well, so if you keep your handling within reasonable limits, it’ll enjoy its time with you.

They also have less complex needs than other reptiles, which makes it easier to care for them. Their diets should be high in protein, with lots of meat and leafy greenery on the side. You can also feed your Wood Turtle fruits and seeds on a discretionary basis.

You’ll need a reasonably large enclosure because the Wood Turtle grows to 5-8 inches in length at adulthood. I recommend keeping it outdoors for more comfort but make sure the pond is not deep.

Wood Turtles are not aquatic, and they prefer walking on land and basking in the sun. Many Wood Turtles also have orange pigmentation on the front legs, with a bit of yellow on the bottom part of their shells.

Turtles make for great pets, though not all species are as friendly or good-looking. Knowing what the best turtle species are should help you come to a decision about your future pet! 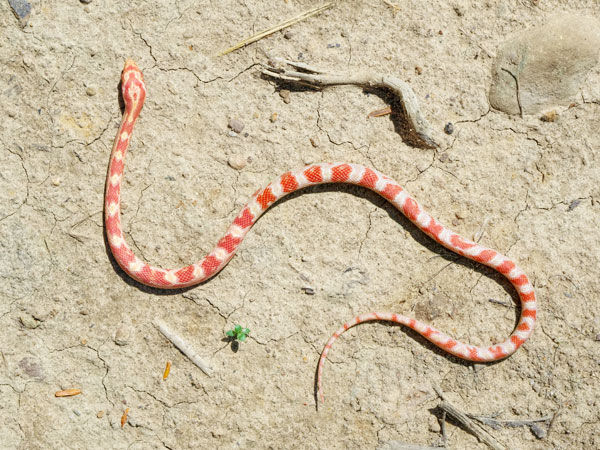 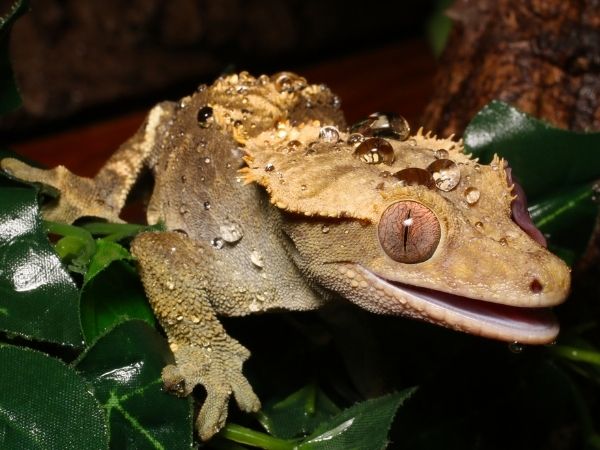 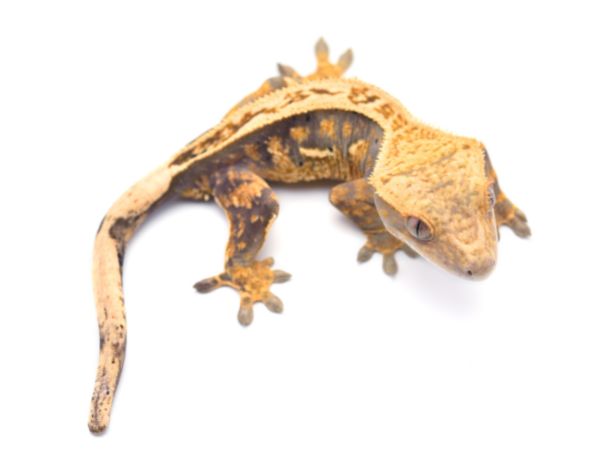 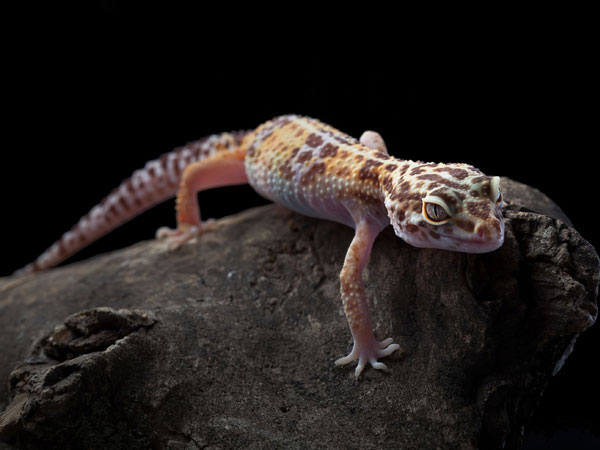