Blue-crowned conures are calm, playful, inquisitive, friendly, and quite affectionate. They are known to be exceptional birds. These lovable parrots have less capacity for biting than several other conure species.

They are the sweetest and most laid-back of the conure group. 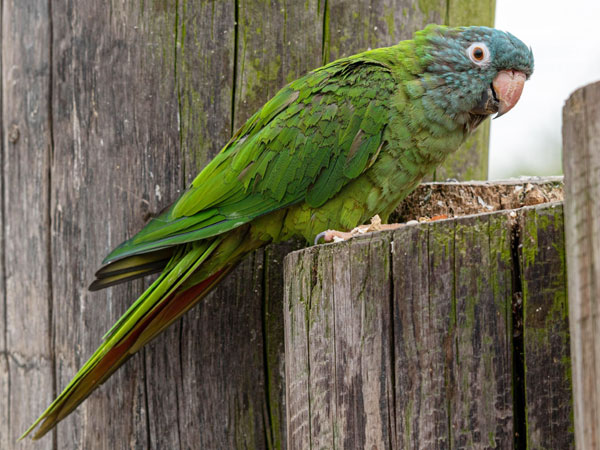 Every breed has a dramatic difference in temperament, disposition, and mood. Their temperament depends on the level of socialization with humans.

Blue-crowned conures are obviously good-natured pets. They have unique characteristics that make them ideal pets for families with children.

Learn more about the blue-crowned conure in this article.

Blue-crowned conures thrive in tropical regions. In the wild, they live in large flocks. In the flight, blue-crowned conures are quite noisy. You can easily recognize them in the trees due to their loud calls. Their coloring makes it hard to spot them, especially when they sit quietly in these trees.

Females and males are identical in pattern and color. Blue-crowned conures have a reddish head at birth. It turns to bright blue when the bird reaches maturity.

You will need a genetic test to differentiate between a female and a male blue-crowned conure. It’s hard to notice any physical difference. The males tend to have bigger white eye-patches and longer feathers on their ceres (nostrils) than the females.

The blue-crowned conure is well-known as an intelligent bird full of energy. Like every parrot, particularly conures, blue-crowned conures require plenty of exercises and mental stimulation to prevent them from becoming restless and bored.

They are very social and affectionate creatures. They develop strong bonds with their owner, who gives the attention they deserve and treats them well. The blue-crowned conure hardly bites, which makes it an ideal pet bird for families with kids.

They are highly trainable, so you can teach these birds to wave, turn around, and retrieve items. The best way to train them successfully is by rewarding good behavior with treats and attention and ignoring bad behavior.

However, there are no ways to make this noisy bird quiet. If excited or upset, it can shriek or scream, which isn’t a good thing for apartment dwellers. Any attempt to scold them when screaming will only make them louder.

Blue-crowned conures have a unique bright blue head, green plumage, and orange beak. They can grow up to 16 inches in length and weigh a maximum of 165 grams.

The blue-crowned conure is considered a large bird, compared to the smaller, green cheek conure. You can find out more about different conure weights and sizes in the linked guide.

The blue-crowned conure is not one to be left confined in a cage for too long periods. In the wild, they are highly social and spend most of their time with a flock. In captivity, you need to serve as its flock mate.

If you aren’t around for most parts of the day, you can get another bird to make you blue-crowned conure happier. Leaving your radio or television playing while the pet is alone at home can also make fit happier.

These unique parrots enjoy snuggling under things like a piece of fabric, a small blanket, or a tightly woven cloth. They might even desire a bird tent for sleeping.

In the wild, these birds love to bathe every day. While in captivity, you need to bathe them at least every week, and more often if you can.

Frequent bathing helps to keep their skin and feathers healthy. Ensure to wet the bird using a spray mist (containing lukewarm water), as it can count as your bird’s interaction time.

Feather picking is very common among all conures, and it’s due to inadequate stimulation and attention. Spend enough time talking to your pet, train them to learn speaking or some tricks, and provide several kinds of toys to prevent the conure from getting bored.

Blue-crowned conure, like their cousins, are also vulnerable to various kinds of common bird diseases, such as:

In the wild, the blue-crowned conures eat varied diets, including grains, nuts, vegetables, berries, and fruits.

In captivity, these birds require equally varied diets that consist of vegetable greens, high-quality pellets, and fresh fruits. Pellets should be up to 75 % of their diet. Give your blue-crowned conure about a quarter cup of pellets each day and observe the quantity it consumes.

You can give the pet mote if necessary. Conures generally consume about 20 % of their body mass. Offering your blue-crowned conures high-fat diet consisting of only nuts and seeds can result in health issues.

Give your pet some fresh foods one or two times daily. Offer as much as it will eat. Remove any uneaten foods when the bird is satisfied. The most active feeding period is usually early in the morning; these diurnal animals become hungry after the night’s rest.

They can also be fed again in the evening (right before dusk). In the wild, birds naturally forage for their final meals before resting through the night. Keep in mind that avocado and chocolate are harmful to conures.

Blue-crowned conures naturally have a high energy level. They love being out of their cage, talking, and interacting with humans all day long. Ensure to give your pet at least three to four hours of playtime outside their cage daily while monitoring them.

Create a freestanding structure outside the cage so the bird pet can stretch its wings. During that period, give your bird the social interaction it requires from you.

If you won’t be releasing your pet from its cage regularly, provide a spacious enclosure (measuring 36 inches x 36 inches by 36 inches) and put plenty chewable.

Toys enable the bird to get some stimulation and exercise. If your blue-crowned conure doesn’t get these chewable toys, it might chew less desirable items, such as woodwork, furniture, and wires around the house.

In the wild, blue-crowned conures breed mainly in tree caves. In captivity, they easily accept nesting boxes, and they are popular for being prolific breeders — they can produce up to 3 clutches within twelve months.

However, two clutches per season are ideal. These birds are not dimorphic, which implies that you will need to sex them via a chromosomal analysis, a DNA sampling, or surgically.

You need to provide a top-quality aviary for your blue-crowned conure. The minimum recommended size is 36 inches by 20 inches by 20 inches. This size gives the bird enough room to hop, climb, and flap its wings—however, the bigger the cage, the better. So get the largest affordable cage.

It should have a ¾-inch bar spacing. Ensure to provide many perches in the aviary and plenty of toys to chew on and play with.

With healthy diets and adequate care, you can improve your blue-crowned conure’s lifespan. They are quite loud and active birds.

In the wild, you can easily recognize these parrots due to their very loud sound. That’s why they are easy prey for other wild animals.

While in captivity, blue-crowned conures get good interaction, adequate care, and a healthy diet. It makes them healthy and active.

The bird’s natural lifespan is between 30 and 40 years. It’s essential to increase their energy and life, as they offer lifetime commitment.

Blue-crowned conures aren’t great talkers among parrots like African greys or Quakers. But in terms of talking abilities, these birds are good talkers among conures.

They have high intelligence and a strong vocabulary. They are eager to learn new vocalizations.

Conures are generally not great talkers as much as other parrot species. However, blue-crowned conures are among the best conure talkers. They can learn several phrases and words.

These highly social and talkative birds make good companions and are ideal pets for children too.

This species can be noisy in the evening and morning, which may cause problems for your neighbors.

Blue-crowned conures are great breeds in captivity and are among the few parrot species you can easily get from breeders or pet stores.

These birds are easy to care for and make wonderful pets. 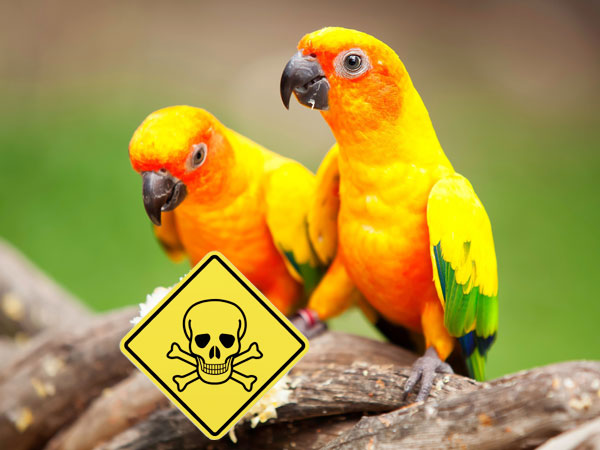 What Should Conures Not Eat? 10 Foods to Avoid 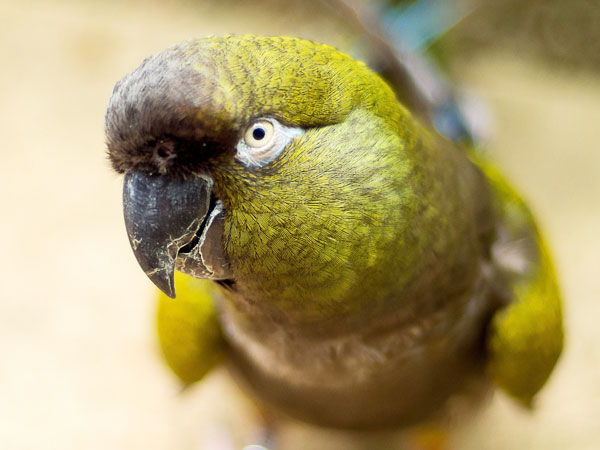 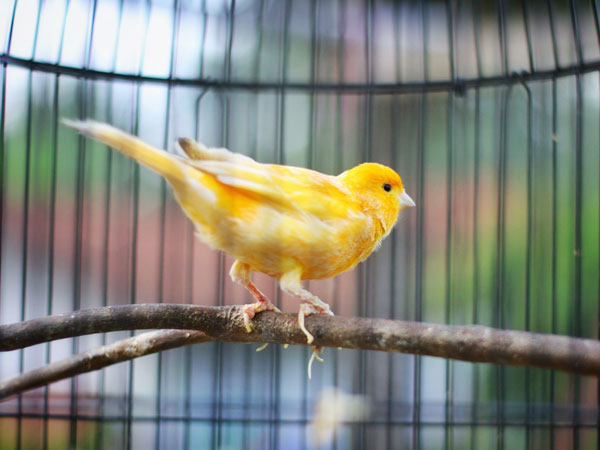 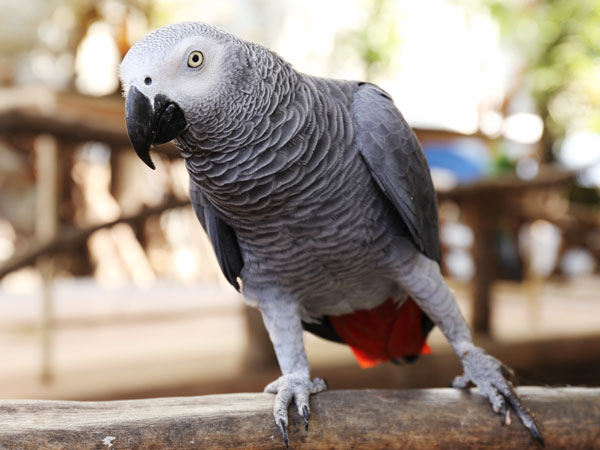