Pancake Tortoise – contrary to popular beliefs, this isn’t the name for a famous cake. It’s a tortoise that looks like a pancake, almost. Its shell is very flat and elongated, just like a pancake on the asphalt. 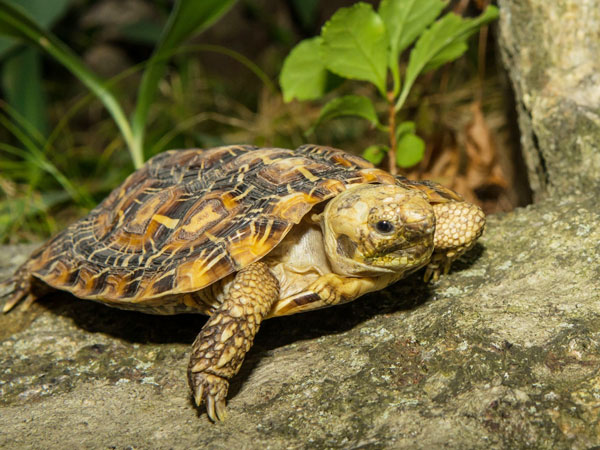 Their natural habitat is made up of rocky terrain, so this brown camouflage is perfect for extended survival. The plastron or the belly of this tortoise is yellow, while the limbs, head, and tail are yellow-brown.

Baby tortoises have a domed shell after birth but, in time, this shell becomes thinner and flatter. It’s an evolutionary perk that gives them an advantage in surviving their predators. We’ll discuss this advantage more in-depth later on but for now, just know that the Pancake Tortoise is unique among its brethren.

Pancake Tortoises spend most of their time on rocky terrain for added protection. When threatened by predators, this tortoise doesn’t hide in its shell. Rather, it runs to the nearest cliffs and enters a crevice to escape the danger.

Its activity level peaks in the morning, when it looks for food and basks in the sun. It won’t stay out for too long – about an hour every time. But during that time, it’ll become very active because it knows dangers are everywhere.

What’s more, more than ten Pancake Tortoises can inhabit the same rocky crevice. They are very sociable and friendly, as long as there’s enough food to go for everyone. As a pet, this tortoise is very active and pet-friendly, though don’t expect it to enjoy fondling too much. Like all other tortoises, it prefers its sweet time alone with no one to disturb it.

From a point onward, this tortoise will start recognizing its owner and happily await your arrival with food. You’ll be able to pet it during the morning when it becomes more active. Watching such a tortoise run around the enclosure, basking in the sun, and eating its greenery is something to behold indeed!

Pancake Tortoises have a relatively short lifespan of 25-30 years. But many specimens have gone above this number. In captivity, though, most of these tortoises don’t live beyond 30 years. With the right nutrition, housing, and care, they’ll have a happy 30 years, though.

It’s up to you to provide it with everything it needs, from the right temperature to the right humidity, a spacious enclosure, and a proper diet.

You can keep a Pancake Tortoise indoors or outdoors, depending on the space at your disposal. I recommend keeping it outdoors since it simulates its natural habitat better. Build its shelter with a few things in mind, such as temperature, humidity, cage size, and lighting.

A tortoise needs all these things to remain healthy and happy. But need more than general stuff. You need specific instructions, and I’m here to give them to you.

Tortoises need a warm enclosure so they don’t start hibernating. Typically, the hotspot should be at 100 degrees Fahrenheit for Pancake Tortoises. That’s where you should place a heating light or a ceramic heat emitter. Only a corner of the enclosure should be this warm.

The rest of the enclosure should be at around 70-75 degrees Fahrenheit. The heat emitter should remain on for 24 hours per day. The tortoise will go between the two areas when it needs to.

If you house the Pancake Tortoise outdoors, then you won’t need a heat emitter all day long. When it’s warm outside, the tortoise will bask in the sun and then retreat to its enclosure to cool off. In any case, the temperature should be just enough so it’s not dry but also not too humid and cold.

Never combine a cold atmosphere with moistness and dampness because tortoises can easily develop respiratory issues.

Pancake Tortoises will need about 55-60% humidity in their enclosure, though you may also go to 40-45% in the evenings. These tortoises like it more humid during the morning, and drier in the afternoon and evening. Baby Pancakes, on the other hand, need 75-80% humidity when growing up.

The biggest cause for baby tortoise death is dehydration, after all. If you plan on letting your tortoises mate, you better be ready to provide enough hydration for the little ones.

You can offset additional humidity with the heat emitter and the UVB light. Keep the substrate moist and humid at all times because it helps tortoises cool off. Having a bowl of water in the enclosure also helps with the humidity levels. As I said before, though, if the humidity level is high, make sure it’s warm enough so the tortoises don’t become sick.

An indoor enclosure should be at least a 40-gallon terrarium. A tortoise needs enough space to move around, with ornaments and obstacles to encourage activity. Make the substrate from rabbit pellets, bark, or coconut bedding.

You can also use potting soil without fertilizers or pesticides. A shallow water bowl is also necessary when the tortoise wants to soak. Hydration is paramount to a tortoise, despite being a land-dwelling creature.

Outdoor tortoise housing requires a 4 square-foot enclosure. Add an extra 2 feet for any additional tortoise you want to house there. Construct 1-foot-tall walls around the enclosure for babies, though adults may need a higher wall.

Pancake Tortoises are able climbers, so don’t underestimate them. I also recommend getting a screen top to cover the enclosure, for this exact reason. When Pancakes start climbing, they’ll even go up vertical walls without a problem.

When it comes to lighting, Pancake Tortoises are just fine with a UVB bulb that lights up the entire enclosure. Keep it on for 12 hours per day to best simulate a normal day cycle. This is only for an indoor enclosure, though.

For outdoor enclosures, you rarely need an artificial light source because the sun is enough. Tortoises will get out and bask in the sun for hours on end, before retreating in their shelter.

Pancake Tortoises require an efficient and extensive diet to remain healthy and active. Getting food rich in calcium, vitamin D3 and A provides enough nutrients for any tortoise. With the right diet, a Pancake Tortoise can even go above the 30-year average lifespan. Be careful not to offer poisonous food to your tortoise. Illness will dramatically reduce the lifespan of a tortoise if it’s severe.

Feed your Pancake Tortoise with lots of leafy greens and dry grasses. Being herbivores, for the most part, tortoises will enjoy hay, mustard, turnip, collard, squash, hibiscus leaves, and other green stuff. I also recommend that you supplement its food with commercial multivitamins and calcium. Tortoises love commercial pet food, no less, so it’s a good idea to provide it with some.

Fruits are also part of the Pancake Tortoise’s diet but not in excess. Too much sugar can lead to diarrhea or worse. You should feed your tortoise in the morning when it’s most active. During the afternoon, it’ll retreat to its enclosure and doze off or have a bath. In the evening, you may want to offer some more food if your tortoise is hungry again. Essentially, place a pile of greenery in the enclosure because the tortoise knows when it’s hungry.

Proper hydration is essential to all tortoises, including Pancake Tortoises. The substrate in the enclosure should be moist and a bit damp. Tortoises love digging small holes in the ground and burying their limbs inside. It keeps them warm during winter and cool during the summer. Another good source of hydration is a shallow bowl of water in the enclosure.

Tortoises like to drink water from time to time, to supplement their water intake. The main source of water comes from the juicy greens they eat, though. Make sure you provide your Pancake Tortoise with enough leafy greens and some fruits. This becomes their main source of hydration over the long term.

The breeding season of Pancake Tortoises is between January and February. This applies to tortoises kept in captivity, as well, though they may choose to mate all year round in some cases. Once the mating ends, the female will lay one egg at a time in the sandy dirt, in 10cm-deep holes in the ground. The tortoises don’t need to take care of the babies at any point during the development or hatching.

Usually, with Pancake Tortoises, males fight against one another to get an opportunity with a female. So, larger and stronger males will likely spread their genes the most. The Pancake Species may be polygynous or polyandrous at any time. Females may have multiple mating males, but the other way around is true as well. The incubation period of the baby tortoises is 4-6 months in captivity.

It’ll be a cold day in hell when Pancake Tortoises stop being ideal pets. Their relatively small size, swift movements, and flat carapace make for quite a show early in the morning, when they’re most active.

What’s not to like about a sprinting tortoise that quickly runs around the enclosure after being scared by something? If you place ornaments, small rocks, and cliffs around the enclosure, you’ll see its climbing prowess first-hand. Feed it right, ensure the proper temperature and humidity, give it a source of light, and the Pancake Tortoise can become a great pet! 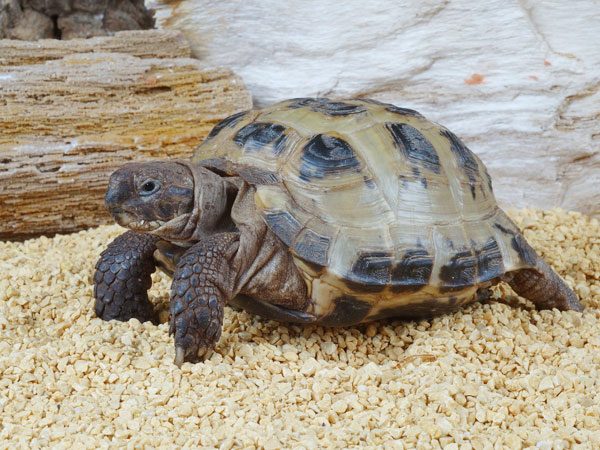 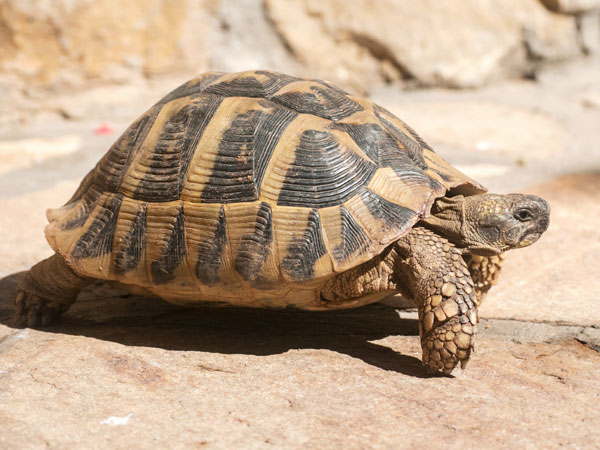