How to Get Rid of White Foam in Guppy Tank?

VIVO Pets » Fish » Guppies » How to Get Rid of White Foam in Guppy Tank?

Guppies create bubbles for a variety of reasons. Feeding, breeding, swimming, playing near the water’s surface – all these activities will create some bubbles in the tank. The problem occurs when you start noticing surface foam which isn’t typical for guppy tanks. 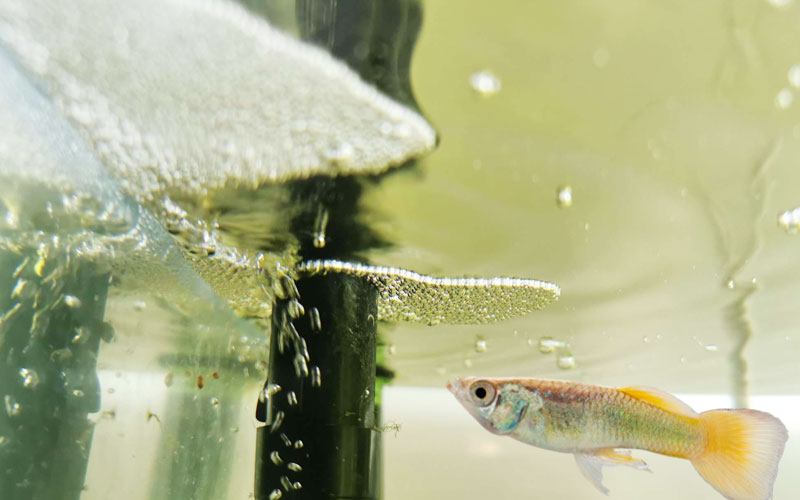 You can safely eliminate bubble nests from the list. Many tank male fish will create bubble nests during the breeding process to hold and protect the eggs until hatching. Guppies, however, don’t do that.

So, what’s causing that unexplained white foam at the water’s surface, and what can you do about it. Let’s discuss this more in-depth in today’s article!

There may be several issues causing surface foam in your guppy tank that require immediate solutions. The most widespread ones include:

This is a natural process resulting from agitating any liquid, especially near the surface. It generally occurs due to a partial water change, bubble stones (if you have any), and even a potent filtration system. The effect may be the accumulation of bubbles at the water’s surface, often resembling white foam.

It’s nothing to worry about since this type of foam is harmless and will go away on its own. If you don’t like how it looks, consider changing the filtering system and performing water changes with greater care. Don’t pour the water into the tank from a bucket, but use a plate instead.

This will allow you to minimize the water’s impact and reduce the bubbly effect. Don’t worry, it shouldn’t take too long to perform the water change this way, especially if it’s partial.

Dirty tank water. This is the number one reason for surface foam in all fish tanks. Not performing regular water changes will lead to the accumulation of fish waste, food residues, ammonia, and other harmful chemicals. White foam may become visible at the tank’s surface in severe stages.

This tend to be a combination of fish waste, mucus, and debris trapping oxygen particles and creating a white blanket. In this case, the presence of white foam suggests the need for immediate cleansing.

I suggest removing the fish from the tank, along with all the plants and tank decorations, and cleaning the tank thoroughly. Do a partial water change of up to 25% and make sure to adopt a thorough water change routine to prevent the problem from resurfacing in the future.

Protein buildup or oily biofilms are just pretentious names for ‘accumulation of decaying matter coming from dead fish, rotten plants, and fish waste.’ Dead guppies aren’t always visible, especially if you have a large tank with plants, rocks, a thick substrate, caves, etc. This will lead to their corpses decaying in the tank and eliminating protein molecules which will bind to air bubbles, making them oily and smelly.

These bubbles will stick together in certain areas of the tank and float to the water’s surface to eliminate their odors in your room. You will probably smell the accumulation of white foam at the surface before seeing it.

The solution also comes down to cleaning your tank more often and performing regular water changes. You should also monitor the guppy population daily to see if there’s bullying, sick guppies, and even pregnant females.

Guppies may fight occasionally and, despite not killing each other directly, they may inflict wounds to one another via nip and tail nipping. These can get infected, killing the guppy in the process. Monitor your guppy population dynamics to identify any signs of misplaced aggression and prevent any deadly incidents.

The problem is that many people treat sick guppies in the main tank, which isn’t necessarily a bad thing. The idea is to make sure that the medication you’re using will not affect the healthy tank inhabitants. You are now left dealing with the problem of white foam.

Many types of medication will increase water hardness, making the tank water thicker. This will lead to trapped oxygen bubbles raising at the surface and failing to escape the liquid. What you get is a thin foam that will disrupt your tank’s esthetics. Don’t worry, it won’t hurt the fish. It just that it doesn’t look good.

To avoid that issue and prevent the formation of medication-related bubbles, quarantine the fish before treatment. This is a good advice in general anyway since some diseases are contagious, so quarantining the fish will protect the healthy guppy population.

Overcrowding is always an issue, no matter the fish species. Overcrowding will stress out guppies, increase their aggressive behavior, and make them more prone to diseases and parasites. The same problem will also result in more fish waste and water residues, increasing ammonia and boosting algae development.

As a result, the tank will get dirty faster, in which case white foam may occur on the water’s surface. That’s usually the clear sign that you need to perform some tank cleaning. My advice would be to prevent the situation from reaching to this point, to begin with.

Provide each guppy with at least 2 gallons of water to prevent overcrowding and perform regular cleaning and water changes. This will keep your guppies’ habitat clean and fresh, improve water oxygenation, and prevent the accumulation of ammonia and nitrites.

How to Get Rid of Protein Foam in Guppy Tank?

As I’ve noted before, protein foam results from dead matter decaying in the tank. The most notable sources include dead guppies and rotting plants. If you’re eliminated all other potential causes, and all you’re left with is protein-sourced foam, you need to act fast.

Dead fish will decompose fast and will poison the water, affecting the rest of the guppy population. You should first try to identify the dead bodies that will most likely be laying on the substrate.

Remove the dead fish, clean any plant residues and dead matter you can find floating in the water, and perform general cleaning. You should also change around 20% of the water to improve oxygenation and further dilute ammonia and other harmful compounds.

As a preventive measure, always count your guppies. This is that much more important if you have a lot of guppies in a large, plant-rich tank where it can be hard to track them down. In this case, guppies may die without you noticing them. By the time you do, their bodies may have already poisoned the water.

Surface foam can occur due to a variety of reasons. Your goal should be to identify the causes and adopt adequate measures to fix the problem. Your guppies require a stable, healthy, and clean environment, which means you should never experience surface foam.

Clean the tank when necessary, perform water changes every week, and always monitor your guppies to identify sick or dying individuals. These basic preventive measures will help you preserve your guppies’ habitat in good condition with minimal effort. 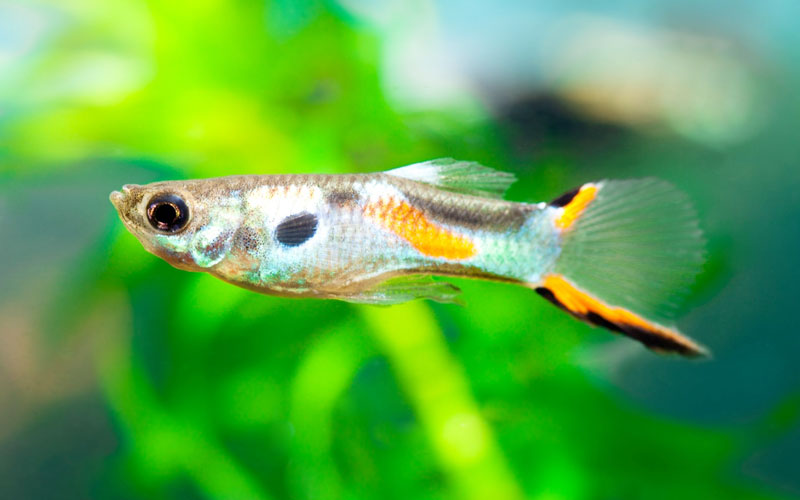 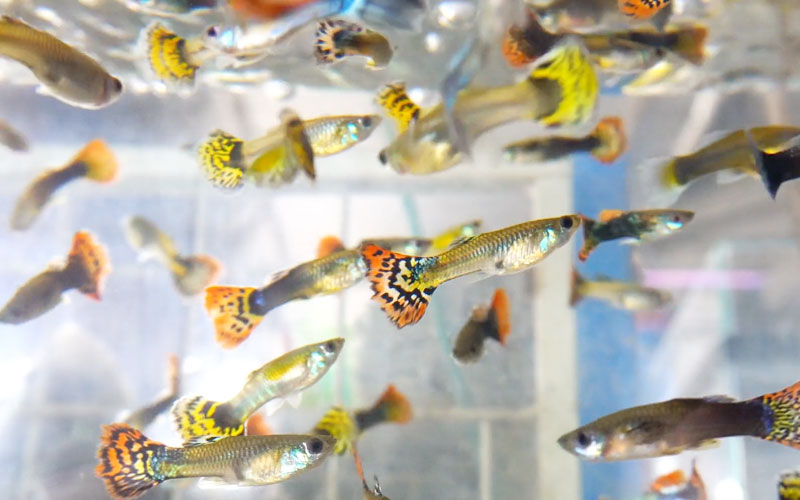 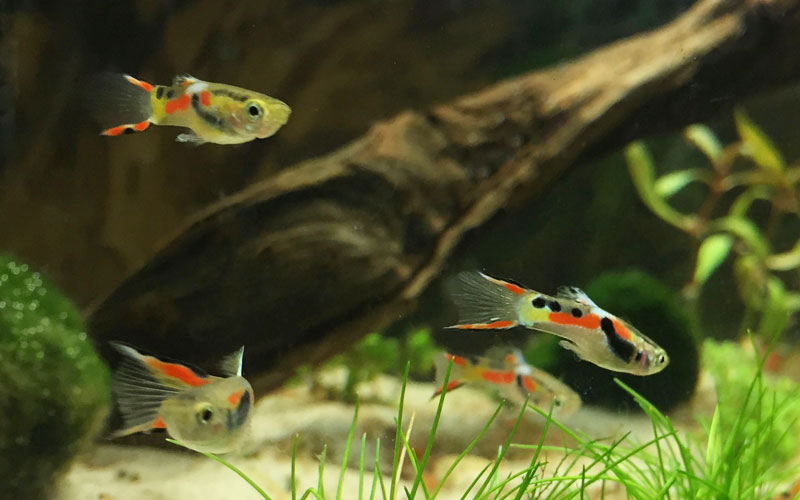 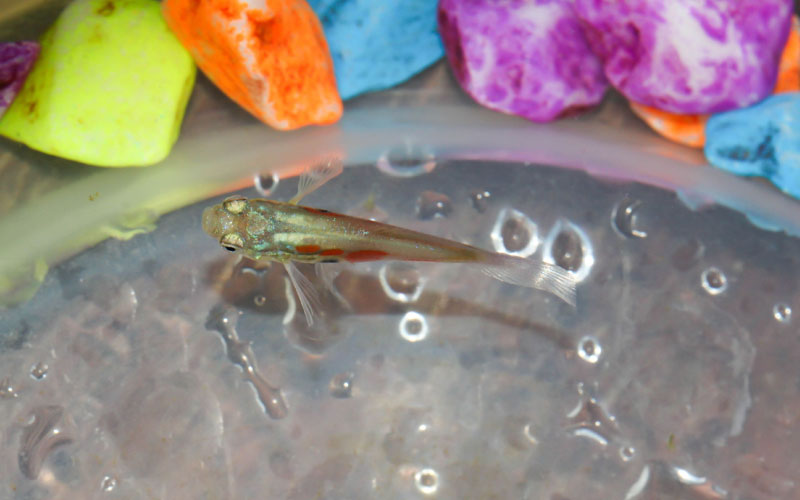 Can I Keep Guppies in a Bucket?