Can Guppies and Discus Fish Live in Same Tank?

Are you thinking about keeping Guppies and Discus together? Perhaps you’re still a bit hesitant or don’t know how to make this combination work. If that’s the case, you’re in the right place! 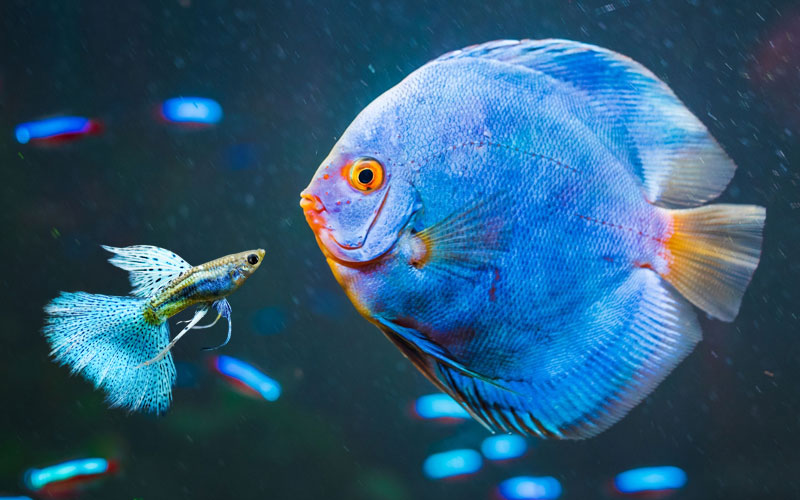 In this article, I’m going to teach you everything you need to know to look after these colorful species. With a bit of tweaking work and diligence, these vibrant fish can be the best tankmates.

Discus are sensitive fish with very strict water-quality needs. They’re not the best option for a beginner aquarist. However, Guppies are hardy and highly adaptable. You won’t have to worry too much about these little guys when setting up your mixed aquarium. Thus, a good rule of thumb is to always lean more towards accommodating your Discus fish first. So, let’s take a closer look at how to achieve this.

Do Guppies and Discus Get Along?

Both Guppies and Discus fish are popular choices for aquarists. But what if you can’t decide which one to keep? Can you put them both in the same aquarium? Will they get along? The answer is yes! These two species are rather different in some aspects, but with some extra planning, you can safely house them in the same community tank!

Guppies are small to medium-sized fish. They range from 0.6 to 2.4 inches in length, depending on their sex. They’re extremely energetic and curious fish with a big appetite. They tend to eat anything small enough to fit in their mouths, including smaller fish.

But they’re actually peaceful and friendly and won’t attack other tankmates. Guppies are hardy fish. They can adapt to a wide range of temperatures and they enjoy hard water. They also require an omnivorous diet consisting of fresh, frozen, dried, and live food.

Discus fish are quite big when compared to guppies. They reach an average of 4.8-6.0 inches in length. They also look a lot wider when seen from the side, thanks to their flat and round-shaped body. Just like Guppies, Discus fish are extremely peaceful. They’re also extremely shy and prefer living in larger groups. They thrive when they’re in good company, and they’ll never attack other fish in the tank.

Similar to Guppies, these fish are omnivores. But they require a specialized diet focused around protein-rich foods. Discus fish also have strict water requirements. They need soft water, which is a lot different from what Guppies prefer.

Keeping Discus and Guppy Fish Together

Before adding both of these species to the same aquarium, you’ll have to figure out how to meet their different needs. You should find a happy medium where both species can be healthy. You won’t be able to perfectly match both species’ requirements. But getting halfway there should be good enough.

So, let’s take a closer look at what these fish need to be happy and healthy. We’ll go over space requirements, water temperature, diet, feeding frequency, group size, and maintenance. We’ll also discuss what you need to do to strike the balance between the different needs of Guppies and Discus fish.

The first and most important thing to get right is the tank size. Discus fish grow quite large, so they need a lot of swimming space. Guppies, on the other hand, are on the smaller side. They can do fine in tiny aquariums. The obvious choice here is to pick a larger aquarium that can house both your Discus and Guppies. So, how big of an aquarium are we talking about?

Discus require at least 7 gallons of water per fish, but up to 10 gallons is even better. Because of their unique shape, these fish also prefer taller aquariums. Discus fish like living in groups of 5 or more, so if you decide to keep 5 fish, you’ll need at least a 50-gallon aquarium. But of course, more space is always better. Up to 100 gallons would work well for a small group of Discus, especially if you plan to add some Guppies into the tank.

Guppies don’t need as much space as Discus fish, but they’re very energetic. They like swimming and chasing other fish around, so they need plenty of room for that. If your aquarium is too small, your fish will be forced to go through unnecessary encounters.

Discus are mellow and slow-moving fish, while Guppies practically dash through the water. Needless to say, they wouldn’t like waiting around for their larger tankmates to make way.

Water temperature is tricky. Both species thrive in different ranges. Luckily, they’re also adaptable to slight variations either above or below the ideal range. Guppies prefer an average of 74-82°F. They can also withstand temperatures around the lower 60s. Higher temperatures encourage appetite and growth, but might also lead to a shorter lifespan.

Discus fish prefer warm temperatures, ideally ranging from 82-86°F. When temperatures drop below their ideal preferred ranges, Discus might experience thermic shock or other forms of physical stress. You shouldn’t let the temperature drop below 82°F, because your Discus might get sick.

It’s better to raise the temperature because Guppies are more adaptable to higher ranges than vice-versa. Around 82°F is also fine for Guppy fish and shouldn’t negatively impact their health. However, keeping the water at a constant 82°F without any fluctuations could be challenging.

With regards to feeding frequency, both Guppies and Discus require two daily meals. Adult Guppies can also eat only once a day. But two meals would be the best way to meet all their nutrient needs. At least one daily meal for Guppies should contain live food. Younger Guppies and Discus need more frequent feeding. Discus fry will eat around 3-4 times a day, while young Guppies can feed up to 8 times a day.

Since both species are omnivorous, they have similar diets and can enjoy the same foods. In the wild, Discus fish eat small crustaceans like copepods, worms, plant matter, and even detritus. Wild Guppies enjoy water insect larvae and algae.

But when held in captivity, both species will eat the same foods. You can give them a combination of shrimp pellets, freeze-dried brine shrimp, blood worms, daphnia, as well as algae tablets, veggie pellets, and flake food. Besides the food itself, quantity also matters.

Both species have a healthy appetite, but Discus tend to eat more due to their larger body size. Make sure you take that into account. If there’s not enough food to go around, your Discus could become aggressive and hoard all the resources for themselves. If that happens, your Guppies will starve.

Both Guppies and Discus are sociable fish. They prefer living in large groups. While both species will appreciate the company of any peaceful and similar-sized fish, they still prefer their own kind more than others. So, you should have one group of Discus and one group of Guppies, as they will shoal separately.

Discus are a shoaling species and need to live in groups of at least 5-6 members. This species isn’t well-suited to live in smaller groups, because they get very competitive over resources. The smaller the group, the more likely it is for a pecking order to form.

Guppies are different in this regard because they usually look for food together. They won’t typically compete for resources, so you can keep them in smaller groups if you want. They still like company, and they gather together for social reasons. So, you should keep at least a trio of Guppies. But more Guppies is even better, especially since a Guppy trio would be largely outnumbered by a school of Discus fish.

Both species are sensitive to nitrates and other by-products that accumulate in the water. However, Guppies are the most adaptable of the two. As long as the water doesn’t contain a lot of harmful compounds and the pH remains stable, you can get away with just a small water change (20-30%) once weekly.

Discus fish, on the other hand, need more frequent water changes. Growing fry may require as much as one water change daily. That’s because Discus fish excrete a harmful growth-inhibiting hormone. The more this hormone accumulates in the water, the slower the Discus will develop.

Just remember that fish don’t like fluctuating water parameters. Abrupt changes in hardness, temperature, or pH might shock your fish. Some fish might die shortly after improper water changes, while others will suffer from negative health outcomes.

Discus are peaceful and friendly. They’re unlikely to eat their Guppy tank mates. However, when there’s not enough food or your fish live in high-stress conditions, it might happen. These big guys might also eat Guppy fry because they’re small and look similar to other live food often enjoyed by Discus.

To avoid these unpleasant scenarios, you should set up your tank properly from the get-go. Make sure there’s enough room for your fish. Feed them twice a day and offer them a varied diet. Add lots of plants and other hiding places where your smaller fish can seek refuge. Last but not least, ensure that the water parameters are stable and within the ideal range for your Discus. Water that’s too cold or too hard can stress them out and lead to hostile behavior.

Guppies get along with any species with a similar temperament. Thus, there should be no reason for Guppies to attack Discus fish. Aggression is uncommon with Guppies. When it does happen, it usually takes place within the group.

Guppies are more likely to attack each other, and won’t go after other species. But each Guppy has its own personality, so it’s hard to tell how individual fish will act. There’s always a very small chance that conflicts will occur.

However, as a general rule, Guppies won’t attack their tankmates as long as their requirements are met. They like chasing other fish around, but that doesn’t mean they’re trying to attack or intimidate.

Guppies and Discus make great tankmates. They certainly look nice together, given their beautiful, vibrant colors. It takes a bit of extra work to accommodate their different needs, but it’s certainly doable. If you have an aquarium big enough to fit a school of Discus and a small group of Guppies, you should give this combo a shot!

Just remember to closely monitor the water parameters. Warm and slightly hard water should work best. Guppies and Discus will do well at around 82°F. Discus generally need soft water to thrive, while Guppies like hard water. Luckily, some European-bred Discus varieties can do well in slightly hard or hard water. 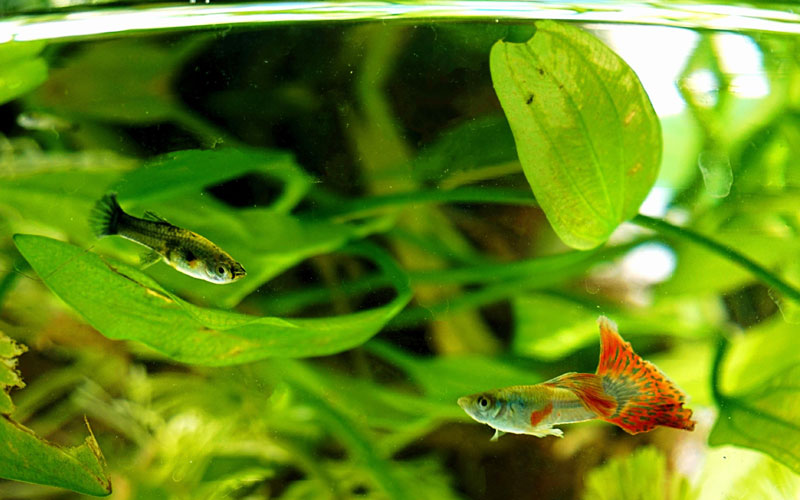 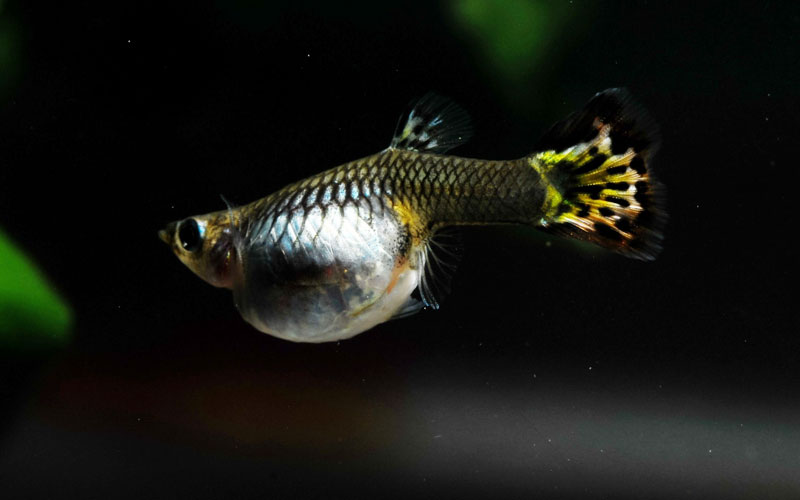 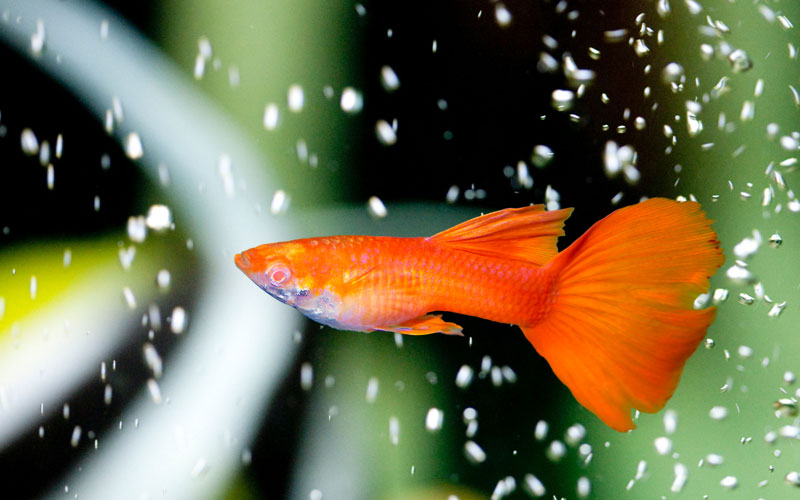 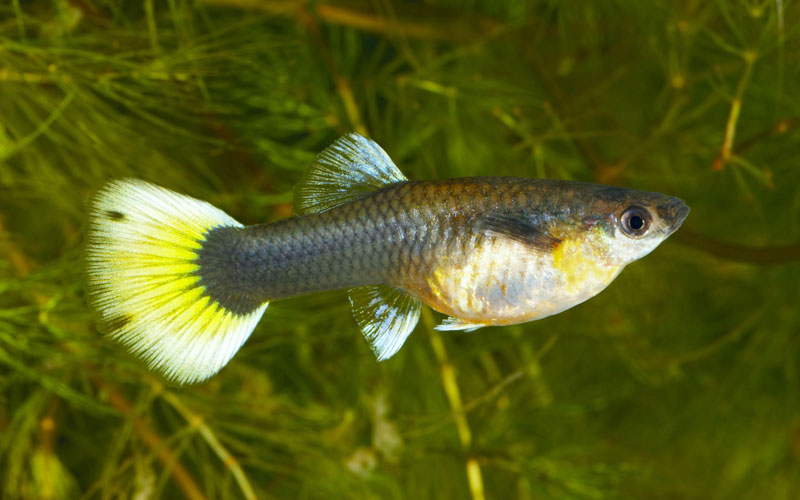