It’s typical for most guppy keepers to opt for mixed aquariums containing multiple fish species. Many even opt to add shrimps, frogs, or aquatic snails into the equation since many species are compatible with guppies. 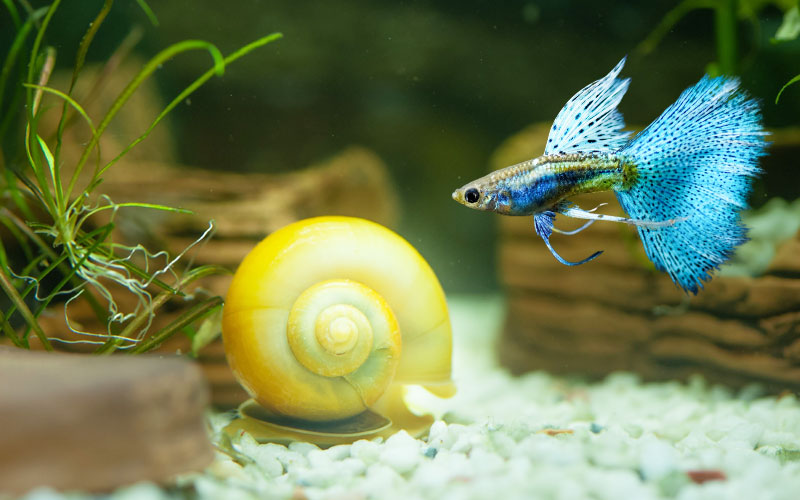 Can you keep snails with guppies and, if so, which species? Not all aquatic snails are good for fish tanks and are not compatible tank mates, which means you need to be very careful about choosing the suitable species.

Guppies and snails can live in the same fish tank. Both snails and guppies are peaceful and they can happily coexist in the same aquarium. Nerite snails, rabbit snails, mystery snails, assassin snails and black devil snails are all good choices for guppy fish tanks.

Generally speaking, tank snails will have a positive impact on the environment. They typically lurk around the substrate and feed on algae, plants, and sometimes dead matter. This will keep the water clean for longer, providing guppies with a fresh and healthy environment.

Other species, however, can impact the guppies’ habitat negatively. This can happen due to some snail species being more aggressive than usual or breeding too much.

Left unchecked, these creatures can quickly overcrowd the tank and take valuable space, oxygen, and food from your guppies. Not to mention, many release a lot of mucus which can foul the water and lower the oxygen levels.

Let’s see which snail species are the most compatible with your guppies and which to avoid.

Which Snails Can You Keep With Guppies?

The good news here is that guppies rarely interact with anything that lives near the tank’s substrate. Guppies generally prefer to spend their lives in the mid-to-upper level of the tank.

Snails and guppies are also not part of the same food chain. Guppies can’t eat snails, while snails can’t catch guppies even if they tried.

With that in mind, here are the most widespread snail species that are the most compatible with your guppies:

These are generally small-to-medium creatures with a shell pattern reminding of zebra stripes. They are harmless to your guppies and will spend all their lives on the substrate, feeding on algae.

They are a great addition to your tank if you have algae problems and need to control the issue.

An important thing to note is that Nerite snails don’t typically breed in freshwater. They will lay their eggs in freshwater, but these will require saltwater to develop and hatch. Your tank is safe from snail overpopulation.

Their name comes from the turtle-like shell, which can render them invisible on a heavily decorated substrate.

There are ups and downs with having Turtle nerite snails in your tank. The downside is that they have a rather bland appearance. If you have a lot of rocks on the substrate, the snail will fit right in, making it very difficult to notice it. This species is also not the walking and swimming type, spending much of its time in pretty much the same areas.

The very cool aspect about Turtle snails is that they feed almost exclusively on algae. Their appetite is also significant. If you have multiple Turtle snails, you might not even want to clean the tank of algae. Instead, you should let the snails do their job.

They are a welcoming addition to a tank overburdened with algae, especially since they have a low profile and are friendly and peaceful. Your guppies won’t even realize their presence.

This is a must-have addition to any tank aiming for diversity and striking visuals. The Golden Mystery snail lives up to its name. This is a large species with a golden shell and body, looking like someone found it in a gold mine.

It is a very beautiful breed with matching temperament. The Golden snail is friendly and peaceful, and, more importantly, it can grow to impressive sizes, bigger than guppies. This can be both good and bad. It will definitely enhance your tank’s fauna, but the situation can also get out of hand if you have too many of them.

With such an ominous name, you would expect something dreadful to lurk under the waters. And you would be half right. The Black Devil snail comes with a large cone-shaped shell, all black. Despite its intimidating looks, however, the Black Devil is a sweetheart.

It minds its own business, moving around the tank in search of food. This is one of the most energetic species, as you can constantly see the Black Devil changing spots throughout the tank.

This species feeds almost exclusively on live plants. Definitely something to keep in the back of your mind.

This is another large breed that will get along with your guppies just fine. The Spike-Topped Apple snail is strikingly colorful, displaying an orange and yellow-colored shell.

The snail is friendly and will mostly feed on fish food leftovers, or even fresh vegetables. So long as they have plenty of food available, they won’t crave your aquarium’s live plants.

The Assassin snail is another colorful addition to your tank life. This breed got its name from its propensity towards hunting, killing, and eating other snails, but they are harmless towards fish.

The Assassin snail is an excellent addition to your aquarium, especially if you have other snail species in the tank. The Assassin will keep their numbers in check, which is great considering that many snails are prolific breeders.

Which Snails You Shouldn’t Keep With Guppies?

It’s also worth noting that some snail species are incompatible with guppies and even tank fish in general. Here are 3 breeds that you might want to avoid adding to your tank going forward:

The Pond snails are a small breed whose main downside is the breeding rate. They will quickly overtake the tank’s fauna leading to overcrowding and fouling the water in the process.

Controlling the population is difficult since these snails are rather small and can easily hide within the tank’s vegetation and decorations. It’s best to leave them out, especially since they’re not particularly unique in terms of visuals.

While the Ramshorn snails are a friendly and peaceful snail breed, their biology makes them unfit tank mates for guppies or any other fish. Aside from breeding fast and quickly overpopulating their environment, these snails will also lay their eggs in thick layers of mucus.

This can foul the water, diminish the oxygen levels and affect the tank’s flora and fauna. I would recommend keeping them out of the tank and focusing on other breeds instead. There are plenty to choose from.

Although trumpet snails are very peaceful and they usually live under the substrate, they breed like crazy. Just like ramshorn snails, they will overpopulate the aquarium and will affect the water quality.

It is also very hard to get rid of them because during the day they will hide in the substrate and will only come out during the night. They can also survive very harsh conditions such as strong ammonia spikes (even bleach).

No, they can’t, and, in most situations, they won’t even try. Guppies either don’t recognize snails as food or know that trying to eat them is a losing battle. Guppies and snails cross paths in the wild constantly and always end up ignoring each other.

The snails’ protective shell is strong enough to shelter them from small fish breeds, including guppies. So, you shouldn’t worry about your guppies attacking the snails.

However, guppies can eat unprotected snail eggs. Snails will typically surround their eggs in thick mucus, protecting them from predators and keeping them pretty much in the same area. But not all snails do that. Some will just lay their eggs without any significant mucus cover-up.

This will allow guppies to find the eggs easier.

This dynamic is great since it keeps the snail population under control, especially in the case of more prolific breeders.

Typically, no. Snails are too slow, and guppies are too fast, which makes it unlikely for snails to eat live guppies. However, they will eat the dead.

Dead guppies will sink towards the bottom of the tank, ending up on the substrate where snails rule. If you have multiple snail species, they will generally gather near the fish’s carcass and start eating it. This scavenging behavior is great for large aquatic environments where detecting dead or dying fish can be difficult.

Your snails will do the dirty work for you, keeping the tank clean and preventing water pollution.

How to Control The Snail Population in a Guppy Tank?

The problem with adding snails to your fish tank is the risk of overpopulation. Snails are proficient breeders and can multiply fast. This will lead to overcrowding, which will eventually affect all life forms in the tank.

Here’s how you can control the snail population to maintain a balanced tank environment:

Guppies can live in peace with a variety of snail breeds. Just make sure you prevent overpopulation by controlling the snails’ breeding rates.

For more questions on aquarium snails and their chemistry with guppies or other fish, comment below, and answers will come shortly. 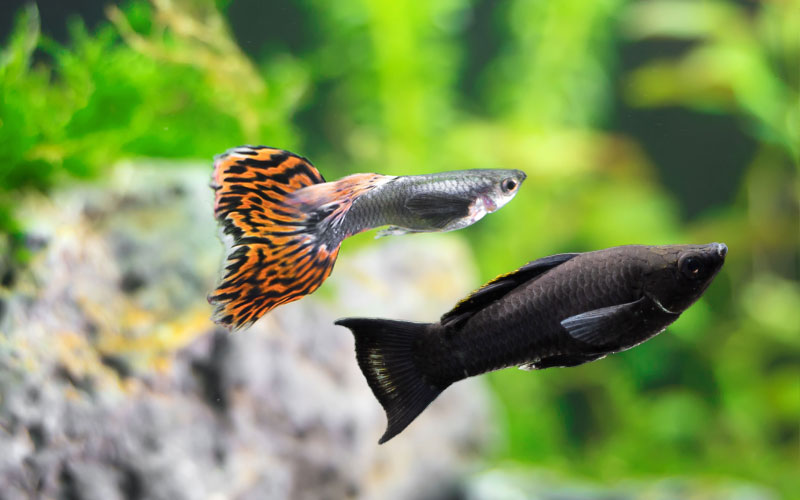 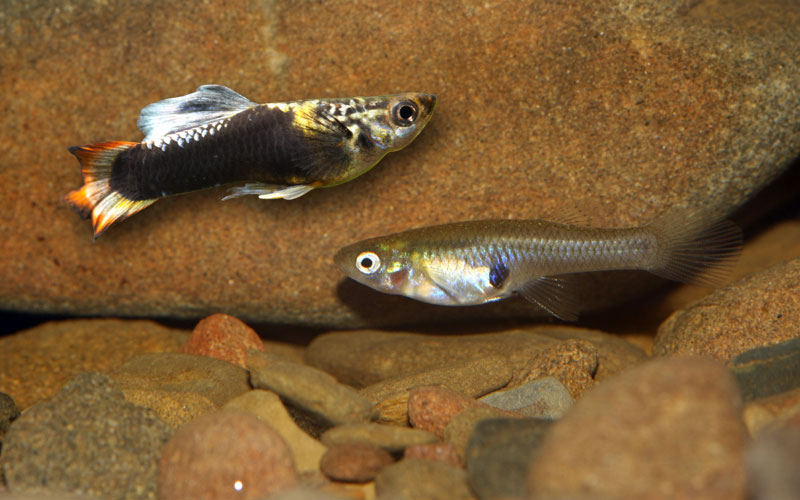 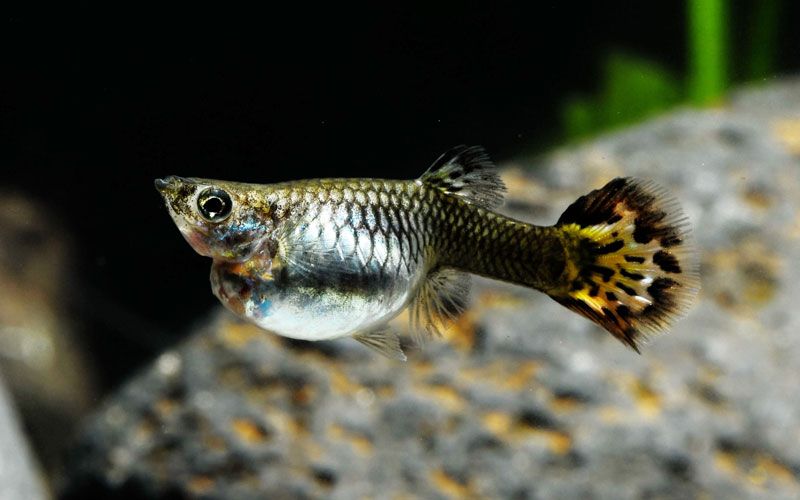 How Long is a Guppy Fish in Labor? 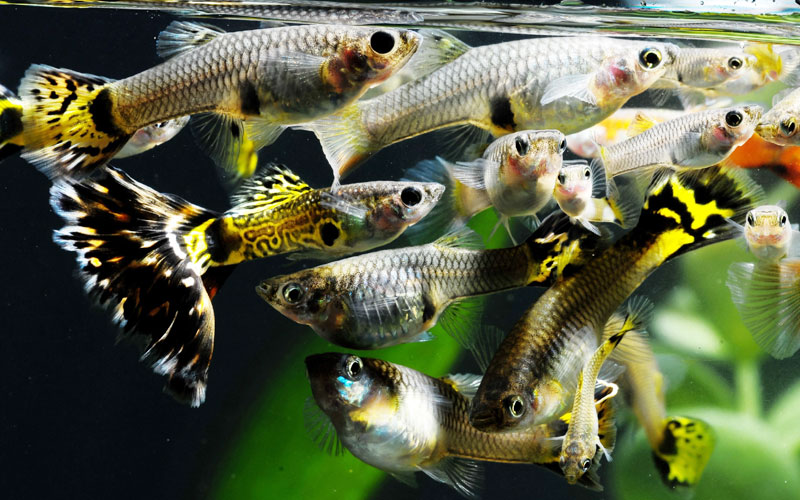