Why is My Guppy Laying on the Bottom of the Tank?

Guppies are some of the most beloved tank fish available. They are cheap, hardy, friendly, easy to keep and display an immense variety of colors and patterns. These fish are ideal for aquarium beginners since they don’t need a lot of work or too much maintenance. 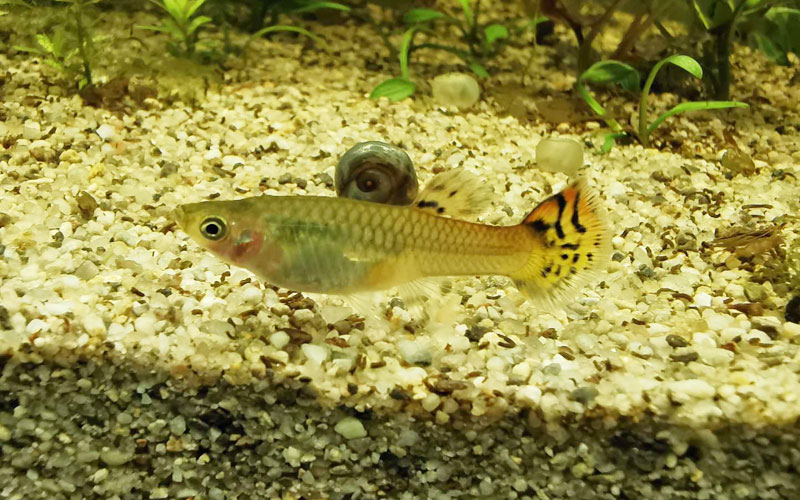 Is It Normal for Guppies to Lay at the Bottom of the Tank?

It depends. As a general rule, though, no, it’s not natural for guppies to lay on the bottom of the tank. This behavior is generally a sign of stress or disease, especially if the behavior repeats often or your guppies lay on the substrate for extended periods.

At this point, discovering the reasons for your guppy’s behavior is key to preventing potentially deadly problems. Fortunately, just because your guppy spends too much time at the bottom of the tank doesn’t mean that something’s necessarily wrong.

So, you need to differentiate between the dangerous and worrying situations and harmless and natural ones. So, today we will do just that.

As mid-dwellers, guppies will spend most of their time swimming around the tank, preferably in the upper areas. However, they will sometimes go near the substrate and even spend some time there. Let’s look at 5 of the most compelling reasons fueling this behavior:

Guppies are generally hardy fish. They shouldn’t have any health issues, provided they’re getting optimized diets and living in clean and well-maintained environments. However, they will sometimes struggle with health problems along the way.

Some of these are the result of a combination of factors. These include stress, a weaker immune system, improper diets, unclean environments, injuries getting infected, genetic predispositions towards certain conditions, etc.

White spots are among the most notorious guppy conditions, along with velvet disease, fin and tail rot, mouth fungus, guppy disease, dropsy, etc. Fortunately, the fish will display several symptoms along the way, depending on the disorder’s profile. The first and most visible one is the lethargy and the hiding behavior, causing the guppy to hide near the substrate.

This behavior is the result of the general discomfort associated with the disease in question. So, if your guppy remains near the substrate longer than normal, always look for visible signs of disease or parasites. The treatment is most effective when performed in the disorder’s early phases. Not to mention, the more the disease progresses, the fewer the chances of the guppy getting better.

Ammonia poisoning is generally lethal since ammonia is basically poison for guppies and tank life in general. Ammonia is the result of bad bacteria decomposing dead organic matter and can have several causes:

Fortunately, the fish will make a full recovery, provided you identify the problem in time and act accordingly.

Guppies are small (up to 2.5 inches), friendly, and social. They have no meaningful defensive assets since they don’t possess fangs, venom, spikes, claws, or any other deterring characteristic to use against predators and bullies. So, pairing your guppy with a more aggressive tankmate will force the guppy to resort to the only defensive tactic it knows to use – go into hiding.

So long as your guppy has plenty of hiding spots to work around, it will be fine for a while. However, the problem is the constant tension throughout the tank, especially if the guppy’s tankmate(s) is overly energetic, aggressive, or displays bullying behavior. Even if the aggressor doesn’t hurt the guppy directly, the indirect effects will pose the greatest impact.

Your guppy will stress out, showcase a lack of appetite, lose weight, and even display a weaker immune system, leaving the fish vulnerable to diseases and parasites. To prevent this problem:

Aside from managing your guppy’s tankmates’ behavior, you should also manage the available space. Overcrowding will cause even the friendliest species to showcase stress and experience higher levels of aggression towards its tankmates.

Pregnancy is another common reason for guppies spending too much time near the substrate. Guppies have a very healthy reproductive frequency, which is another way of saying that they breed monthly. Females will sometimes produce over 200 eggs, many of which will hatch and fill the water with tiny baby guppies.

The guppy female will display visible pregnancy signs, which will become more obvious as the pregnancy advances. The laying-on-the-bottom behavior typically only happens near the pregnancy’s end, when the female is getting ready to deliver. At that time, the guppy will seek a hiding area, generally around the substrate, far away from the other fish.

However, you should have already marked the female as gravid by this point. The most obvious sign is the inflating belly, growing in size considerably in the last trimester. The gravid spot is another good marker to consider. Gravid guppies will showcase a dark spot near the tail, in the lower abdomen, which will grow in color intensity and size.

When the gravid spot turns completely black, your female is most likely ready to deliver. You can also check your female’s behavior while laying on the bottom. If it appears to shiver, you’re most likely witnessing contractions.

However you want to proceed next depends on your goals. If you’re in the middle of selective breeding, relocating the female into a nursing tank is critical to save the fry’s lives. Adult guppies have no problem eating them on sight. If you don’t care that much, allow the female to give birth in the main tank. The guppy population will eat many of the fry, with only several of them making through.

Yes, fish sleep too. Guppies generally sleep throughout the night, but it’s difficult to assess if they sleep in one session or multiple. That’s because, on one hand, guppies sleep with their eyes open. On the other, just because they’re motionless doesn’t mean that they’re necessarily sleeping. Maybe they’re just resting for a while.

No matter the situation, you have nothing to fear as long as your guppy returns to normal in the morning. Just keep in mind that guppies don’t sleep during the day. So, if your guppy lays motionless near the substrate, eliminate sleeping as a potential cause.

And, since we’re at this point, always make sure your guppies have a natural day/night cycle so they can rest properly. It will keep the fish healthy, active, and happy in the long run.

How do You Know if Guppy Fish Is Dying at the Bottom of the Tank?

Guppies will display a variety of Houston-we-have-a-problem symptoms when things go south. If your guppy’s situation is severe, you will see it gasping for air at the surface and, most importantly, display an inability to swim straight or maintain its buoyancy anymore.

The clearest indicator that your guppy is either dying or already dead is floating belly-up. Guppies never go belly up. When they do, it’s a sign that the situation is bad or that the guppy is already dead. Swimming sideways and showcasing difficulty in maintaining a straight swimming position are additional signs in this sense.

If your guppy appears to turn upside down or is unable to maintain its position, I suggest removing the fish from the tank. You can place it in a hospital tank until you figure out what’s happening. Doing so will protect the rest of the fish in case the guppy in question is infected with parasites or contagious fish disorders. 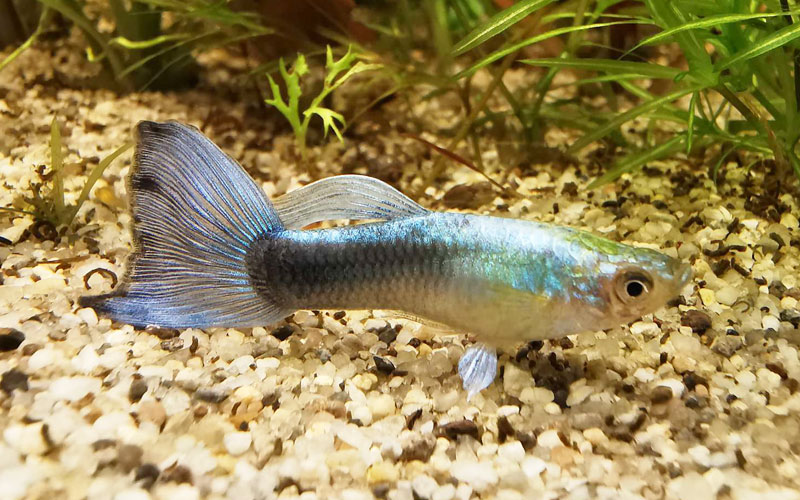 Why Is My Guppy Shaking at the Bottom of the Tank?

But what about non-pregnant guppies? In that case, the explanation may be more ominous. The shaking behavior may indicate a faulty control over the nervous system and muscles. There’s no single condition that’s responsible for this symptom, but several. So, you need to quarantine the guppy and investigate the situation further.

Some of the potential causes include excessively cold water and a highly acidic environment, but you can’t afford to gamble. Talk to your vet if one or more of your guppies are shaking and lethargic near the substrate. This will help you identify the issue and prevent it from worsening.

Guppies are active and energetic fish that like to swim at a steady pace throughout their environment. They won’t go lazy near the substrate without a good reason. In some cases, guppies may simply look for some alone time, but that’s not always the case.

Investigate the problem further if your guppy is uncharacteristically withdrawn and unresponsive near the bottom of the tank. Doing so will often save your guppy’s life. 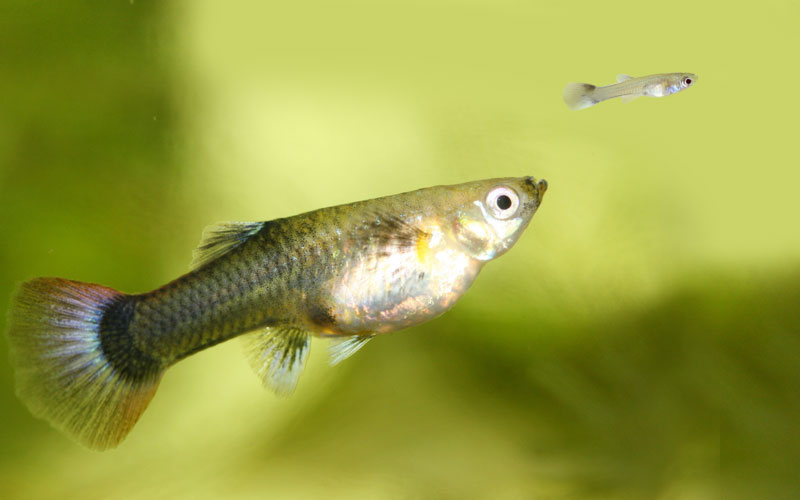 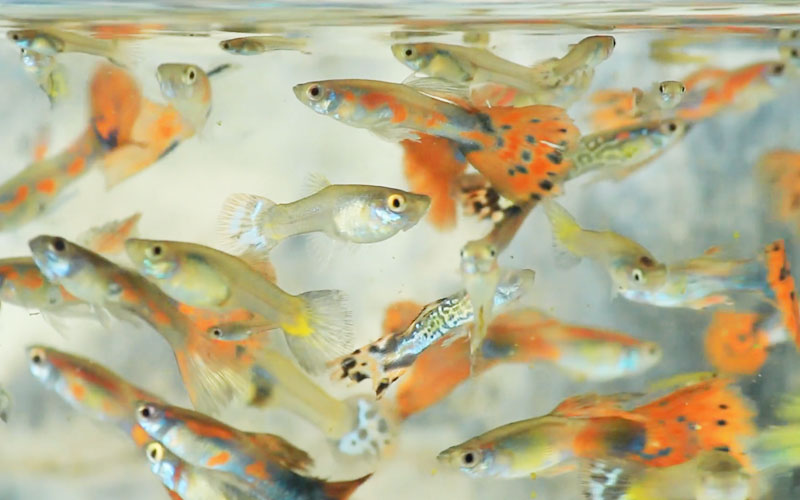 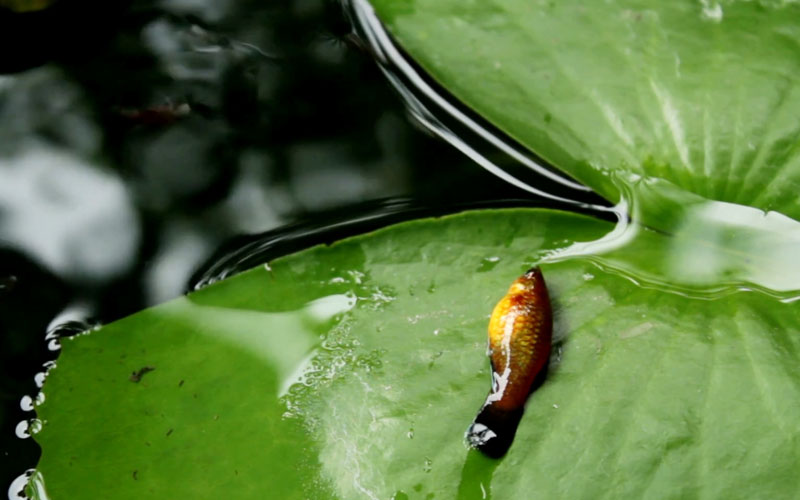 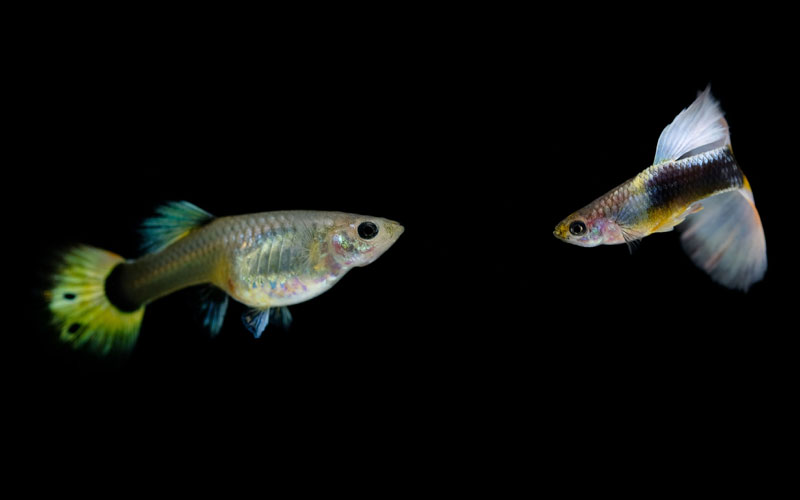