Are My Guppies Playing or Fighting?

VIVO Pets » Fish » Guppies » Are My Guppies Playing or Fighting?

As small as they are, guppies are complex creatures with a variety of behaviors that may seem confusing to novice fish keepers. One of the most tricky tasks is differentiating between playful and aggressive behavior. 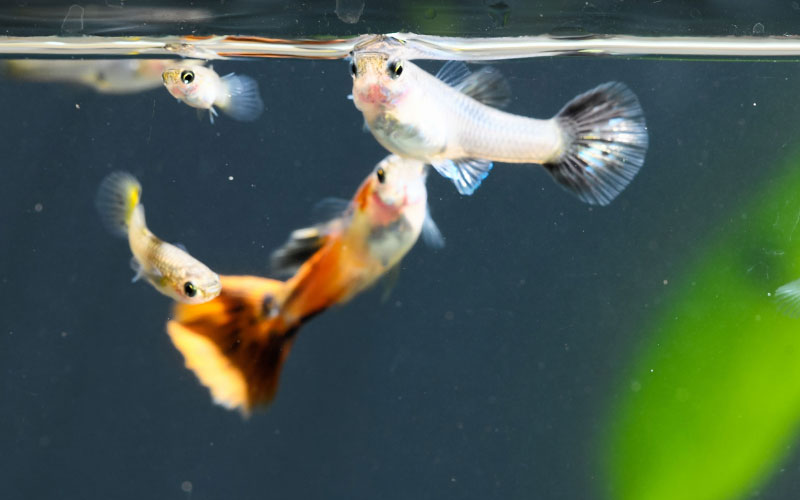 However, it’s important to do it since bullying and fighting can prove fatal for guppies in the long run. They might not have the ability to kill each other directly but will cause injuries that may infect and put their lives at risk.

Guppies are generally peaceful, so they don’t cope well with bullying and aggressive behavior. This can stress them out, which will lower their immune system and make them prone to health issues, including diseases and parasites.

Do Guppies Play With Each Other?

Yes, they do. Guppies are social creatures that manifest schooling behavior when threatened and like to interact with others of their kind. These social predispositions often translate to playful behavior, which is beneficial to guppies.

Unlike when fighting or bullying other fish, guppies don’t hurt each other when playing. You can easily tell when they’re playing by their lighthearted chasing and jerky movements whenever they come close to one another. The playful behavior is universal, as you can observe it in pretty much all living creatures.

If you see your guppies chasing each other, but you see no signs of aggression, they’re most likely playing. Still, monitor their interaction for a bit, just to be sure.

Why do Guppies Chase Each Other?

Unlike other fish, guppies don’t have designated mating seasons. They mate whenever the females are available, and they are available every month, provided they’re not already pregnant. The latter might not matter either, since guppy males will stalk and harass females even when pregnant, trying to pass on their genes by any means.

Guppy males’ persistency may give birth to a lot of chasing, which can cause females to snap back at them occasionally. I suggest providing the females with a lot of hiding spots so they can escape their pursuers more easily. Otherwise, the constant chasing will stress them out, causing health issues down the line.

This typically happens when guppies don’t have enough space in their tank. Males, especially, will display territorial behavior, fighting other males in their vicinity. This can lead to injuries which may infect and put the guppy’s life at risk.

To prevent the issue, consider upgrading the tank, adding more plants and aquatic decorations, and even trimming the number of guppies available. This will provide guppies with more breathable space, lowering their aggression and improving their comfort long-term.

Both males and females abide by a social pecking order that the ruling individuals will typically enforce by violence. This pecking order determines who mates and who eats first, contributing to a stable hierarchy within the guppy population.

It is a natural phenomenon that you can’t do much to control since it’s in the guppies’ genes. Don’t worry, they won’t hurt each other; several pokes are sufficient to pass on crucial information like ‘I’m the boss, move away, or you die.’

You should only intervene if the aggression seems a bit overwhelming.

Keeping too many males and not enough females is always a recipe for disaster, no matter the species we’re talking about. The same goes for guppies. You should ensure a healthy male-to-female ratio, which revolves in the area of 2-3 females for every male.

Otherwise, the males will display a heavily competitive behavior, resorting to bullying and straight-up violence towards other males. They will also harass the females since the females are in inferiority. Overall, this will lead to a stressful atmosphere that won’t do your guppies any good.

We include here improper diets or not enough food, poor water quality, unfit environmental temperatures, overcrowding, etc. All these issues will spike your guppies’ stress meter, influencing their behavior as a result.

You will see your guppies constantly look for hiding spots and become more aggressive towards other tank inhabitants. To prevent this problem, provide your guppies with optimal living conditions.

Clean their tank regularly, feed them at least once per day, have a heating system in place, and perform weekly water changes. You should also provide them with a lot of live plants and various aquatic decorations to increase your guppies’ comfort and make them feel at home.

Like I’ve already explained, guppies also play a lot, which is no reason for concern. It’s actually beneficial for them as it strengthens their social bonds and keeps them active and in good health.

How do You Know When Guppies Are Fighting?

To know whether your guppies are fighting or playing, you need to consider 2 crucial aspects:

If you’ve determined that the guppies are fighting, you need to take action and find solutions that will mitigate the problem. You either increase the tank size, add more decorations to serve as hiding areas, or remove the aggressors to calm the situation.

Why Do Guppies Bully Each Other?

Bullying behavior can occur for various reasons. The most notable one has to do with overcrowding. Forcing your guppies to live in a tight, small environment will mess with their state of mind and spike their aggression levels.

Bigger and stronger males and females will bully the smaller ones, as a result, to let off some steam. This can lead to injuries and stress, none of which are beneficial for the victim.

The same bullying behavior may occur during the mating phase as sexual competition will define the interactions between the males.

Finally, some guppies are simply born bullies and will display a more aggressive behavior on a daily basis. The only reliable solution at your disposal is removing the aggressor from the environment when that happens.

How to Stop Guppies from Fighting?

The solution has plenty to do with the problem. First, you need to assess the situation and understand the problem. The solution is generally self-evident in most cases. In case it’s not, here is some advice on how to approach each situation you may be facing:

Can Guppies Kill Each Other?

Guppies can kill each other, but it won’t happen too often, and, most of the time, they don’t show intention to kill. The only time where guppies will show explicit intention for murder is against guppy fry. The fry are small enough for guppies to see them as food, so they will hunt, kill, and eat them if given the opportunity.

Other than that, guppies don’t kill each other on purpose. That being said, they can cause death via bullying and inflicting injuries on one another. These can infect and might result in the victim’s death due to complications along the way.

As social creatures, your guppies will interact with each other a lot throughout the day. I suggest checking their interactions from time to time to ensure they remain peaceful.

If aggression does occur, figure out the cause and seek to mitigate it. This approach is essential for providing your guppies with a healthy and stable environment in the long run.

How to Tell if Guppy Fry is Male or Female? 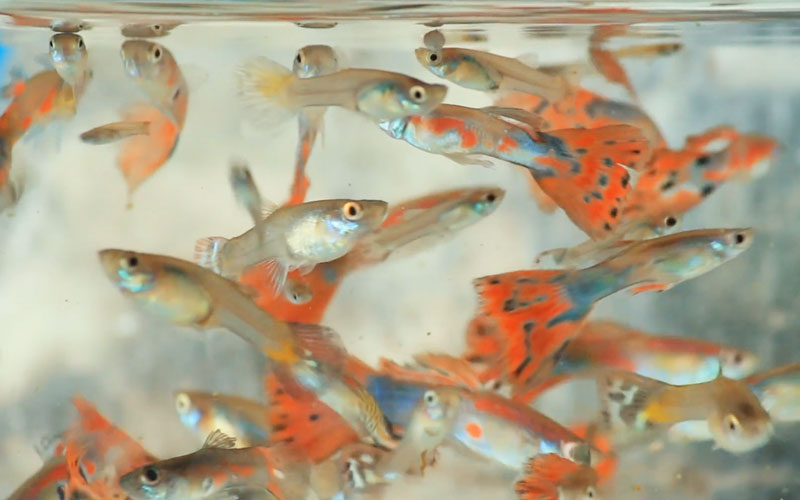 How are Guppies Born? 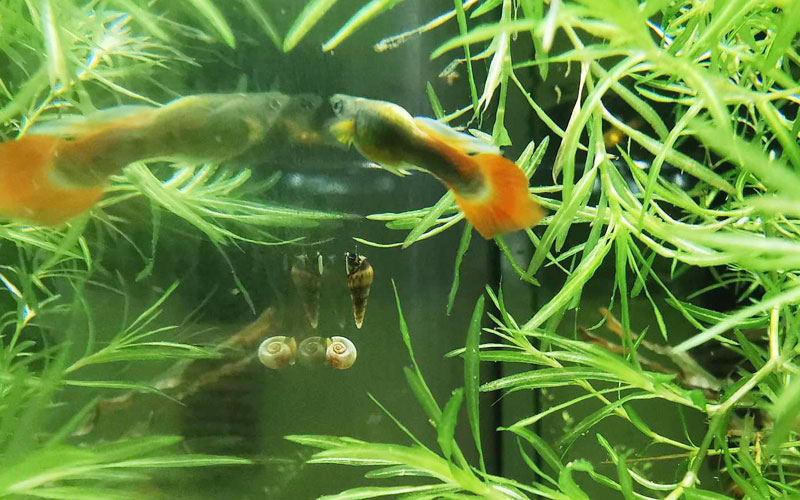 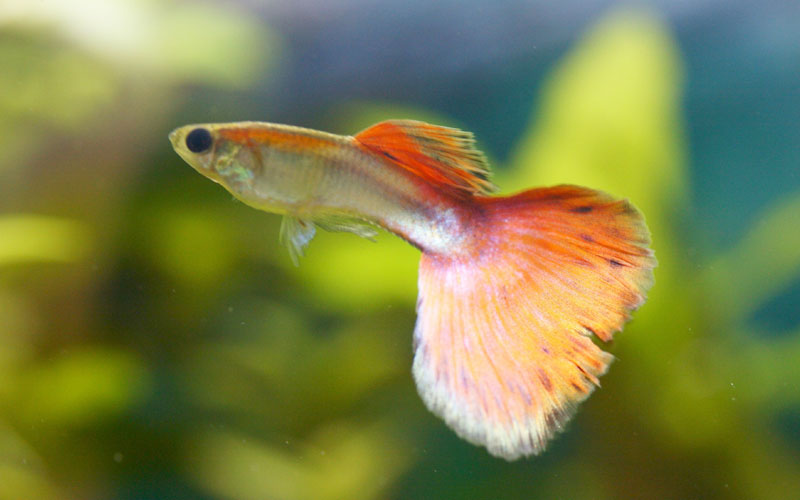